Trent Reznor & Dave Navarro in the studio (via NIN.com) 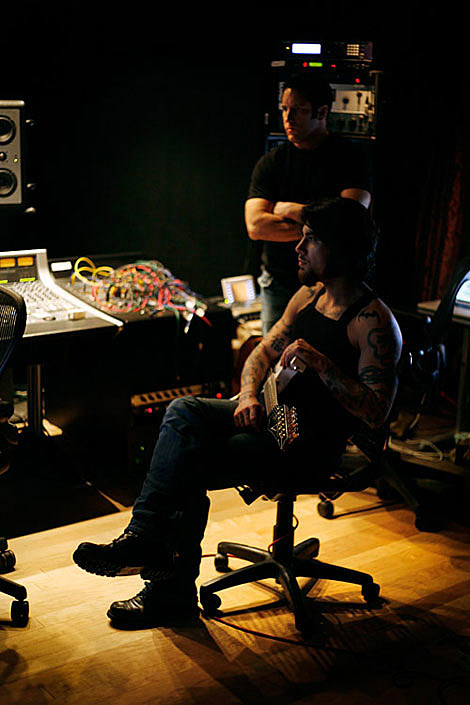 After compiling a list of FAQ, the most popular inquiry on Twitter has been, "When are we gonna get tour dates?" Well those are coming SOON! Right now we are in high gear routing the upcoming tour with NIN and as soon as we have a confirmed tour, you will know. Trust me... It's not like we have the dates and are holding them hostage... We want you to come! I can't think of a better way to start up again then a tour with the original four members of Jane's and NIN.

The original Jane's line up: After many years of different versions of Jane's Addiction, Eric Avery has re-claimed his position. We have had the honor of working with some great bass players over the years... Flea, Martyn Le Noble and Chris Chaney... But the Jane's sound was never complete without Eric. With Eric holding down the bottom, the Jane's rhythm section is once again complete. It's almost as if he and Perk live together symbiotically, to create a singular overwhelming sonic onslaught that ebbs and flows like a musical ocean. Perk and Avery not only bring out the best in each other, their ability to lock and weave with one another challenges and inspires me as a guitarist.

NIN/JA: Since our reformation, we have been spending a lot of time with Trent in the rehearsal studio and in the recording studio, working on new stuff, addressing some old stuff and more importantly, creating a friendship and working relationship. It's rare that touring partners have an opportunity to spend so much time together creatively before a tour. Regardless of the collaborative outcome our time with Trent has brought forth a new focus and sense of purpose that we plan to share with you on a nightly basis. NIN and Jane's are vastly different bands, for sure, but we have always had a connection as a result of our time together on Lolla One and various shows together. NIN/JA shows have always been "events" more than anything. Back in the day, Jane's was winding down as NIN was taking off. Our musical lives crossed each other at a very important time in music. A time where artistry and live performance meant something more. A time when the corporate structures took notice of the value in what was happening, but hadn't yet destroyed it. Touring with NIN is an invitation for us to re-capture that spirit that was at a time, inspiring, dangerous and emotionally compelling, as they have always maintained the same integrity that brought me to love music in the first place.

Jane's Addiction and Nine Inch Nails have officially announced (some of?) their previously-discussed tour together. Kicking off in West Palm Beach, Florida in May, the two alt-giants will hit the NYC-area in June with shows in Jersey at the Tweeter Center (June 5) and PNC Bank Arts Center (June 6) and in NY at Jones Beach (June 7) (NOT JUNE 26). The two bands have nothing scheduled on June 8th. Please let that be a TBA show at Madison Square Garden. If not, why?

Jane's Addiction will also probably be at SXSW in March, and though neither band listed it in the announced dates, they are also both playing Sasquatch in Washington in May. NIN is also playing Bonnaroo in June, and I think it's safe to say that Jane's Addiction will be playing Lollapalooza in August.

Perry Farrell is also playing SXSW solo, and is listed on the Coachella lineup.

All NIN/JANES dates, and a video of Ben & Greg of Dillinger Escape Plan playing live with NIN in Australia the other day, below...