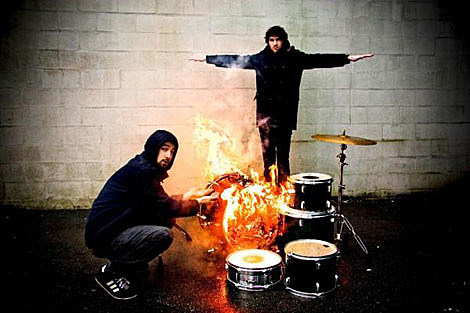 With the weather today in NYC being just about perfect, I imagine the Seaport will be super packed for tonight's show with Pains of Being Pure at Heart (7/10), which will be their biggest hometown show yet. (Jay Reatard may not be there, though.) I don't think a year ago anybody, even those who've loved them from the start, would have thought TPOBPAH would have gotten as big as they have. Their minds have to be kind of blowing, but from what I can tell they're taking it in stride. The band are gearing up for a West Coast tour with Girls (most of TPOPBAH were at Girls' Mercury Lounge show two weeks ago) and then a bigger fall tour with Cymbals Eat Guitars and drummer Kurt's other band, The Depreciation Guild. Kurt has also been known to help out with gothy, atmospheric duo ZAZA who are also on tonight's Seaport Music Festival show.

But what to do after Seaport? Canadian duo (and Pitchfork Best New Music recipients) Japandroids are in town and while Saturday's show at Pianos is sold out, there's still tonight's show at Cameo Gallery in Williamsburg. I'm not 100% sold on the record, though every time a song comes up on shuffle I'm always like "oh who's this?" which makes me more than curious enough to check them out. That loud-and-anthemic quality of their music reminds me both of '80s STT bands like Husker Du or fIREHOSE, and the '90s Halifax scene (Thrush Hermit especially) and I have a feeling Japandroid's live show will put me over into the full-on "yes" category. Tonight's show also features fellow Canadians Little Girls who I wrote about a few weeks ago when they played Littlefield, and local noisemongers Dinowalrus who recently signed to Kanine.

"We just signed to Kanine to put our debut album called "%". it will come out in October.

we already have two 7"s out. one was self-released, the other was a split 7" put out with Bachelor of Arts from Melbourne Australia on EXO (apache beat, slits, japanther)" - Dinowalrus

Cameo's a nice addition to North 6th St, and if you ever find yourself bored by a band there, you can always just stare at the giant hypnotizing psychedelic fiber optic Snuffleupagus head that hangs above the stage.

Japandroids are also playing the Siren Festival next weekend. They go on at 3:00 pm. 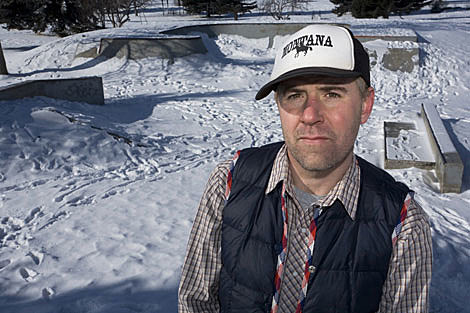 Over at Union Hall, former Grandaddy frontman Jason Lytle plays, supporting his solo debut, Yours Truly, the Commuter. If he'd released it as a Grandaddy record I don't think anyone would've flinched, as it's more of the stoner spacerock about suburban ennui that is Lytle's forte. Maybe it's a little more acoustic based than Grandaddy were, but it's not like he's decided to do anything radically different here. That isn't a criticism per se, as he's really good at it. If you liked Grandaddy, you'll like this. It's a good record. Tonight's show is with The Albertans, who you may remember as one of The L Magazine's 8 NYC Bands You Need to Hear. Jason also plays Bowery Ballroom Saturday (7/11). 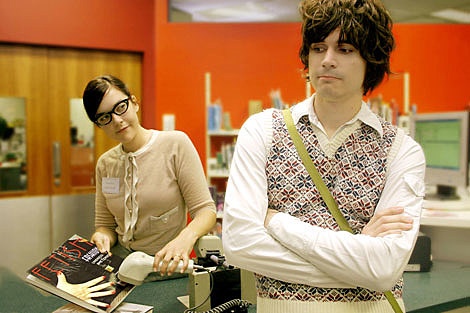 New Zealand's charming Brunettes have been camped out in New York for a few weeks and I keep meaning to write about them and then I forget. They play tonight (7/10) at The Bell House and if you've never seen them before, here would be a good chance to rectify the situation. They are cute as a button and mix lush, Bacharachian pop and '60s girl group sounds with a bit of New Wave. I guess you could call them the Kiwi Bird and the Bee, but Brunettes have been doing it longer. They are very engaging live (maybe you saw them open for the Ting Tings at Union Hall last year?) and The Bell House seems like a nice place to see them. A new record is due out any time now, and they're heading out on a big North American tour soon, and those dates are at the bottom of this post. Also on the bill: Great Lakes, BV fave Sharon Van Etten and Animal Hands.

And then of course Sunday is the first of this year's Pool Parties, with what could be the loudest, noisiest of the summer: Mission of Burma, Fucked Up and Ponytail. While I'll miss the decayed allure of the McCarren Pool, the new location at the riverfront park has it's own appeal, and looks to be a pretty spectacular setting. No slip-n-slide I hear, but surely they'll come up with something else cool to replace it. Let's hope. And remember: no hand grenades, Krull stars, or cargo shorts. See you there.

Tour dates, flyers and videos after the jump.... 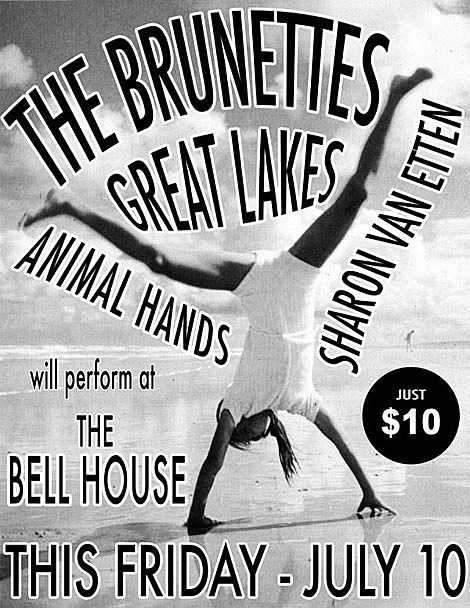 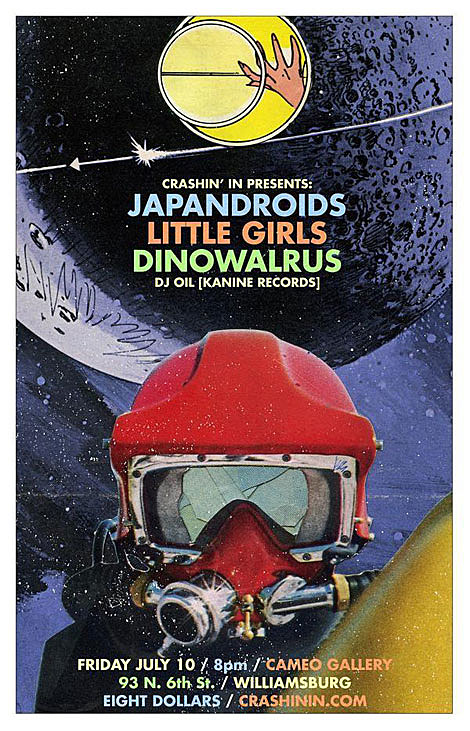 Jason Lytle - I Am Lost