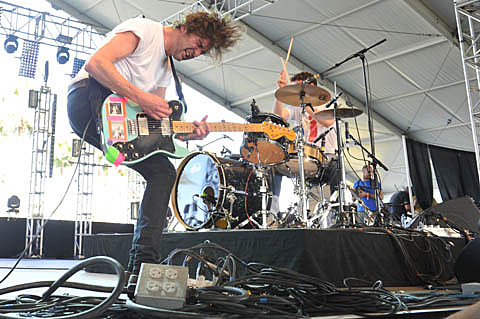 As mentioned, Governors Ball after parties are being planned to happen across various venues in NYC, and it's just been announced that one of those happens on Friday, June 7 at Music Hall of Williamsburg with Japandroids. Doors for the show are at 11 PM and the show starts at 11:30. This show will be almost exactly a year since Japandroids last played Music Hall of Williamsburg, but they've gotten way bigger since, so it should be a pretty intimate (aka sweaty) show for the band at this point. Tickets for that go on sale Friday (4/19) at noon.

Tickets for the Friday and Saturday of Governors Ball are still available. If you're planning on going to Governors Ball and trying to make the afterparty, Kings of Leon headline the fest that night if that helps in decision-making.

Japandroids are over on the West Coast right now for Coachella 2013, which they played over the weekend, and some shows with Cloud Nothings. Check out a video of the band playing "Fire's Highway" at the festival, along with their updated tour schedule, below...