Forward at Chaos in Tejas 2006 photo by Jack Barfield 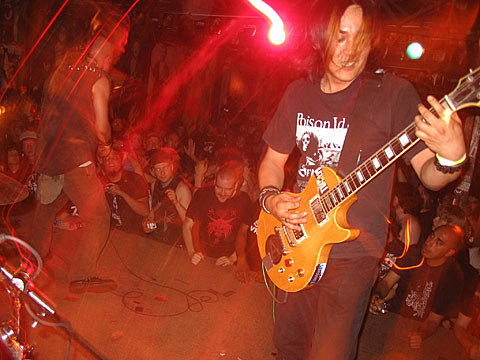 Japanese hardcore greats Forward will hit the road for a string of West Coast/Southwest dates in the days following their appearance at Chaos in Tejas. The crew, which contains ex and current members of Insane Youth, Deathside and Smash Detox, is preparing two reissues and a new 7" via Prank Records (home of that debut Smash Detox 7"); Look for 2000's Just Go Forward To Death and the What's The Meaning of Love singles collection just in time for their appearance at Chaos. All dates are listed below.

In semi-related news, the previously discussed D-Clone tour routing has been revealed and it includes a SECOND NYC stop a few days after the October 6th Acheron show. Though no venue has been revealed, they'll play somewhere in NY on October 11th with Perdition and Nomad. All tour dates and some video below....

FORWARD - What's the Meaning of Love?

FORWARD @PUNKS WERE MADE BEFORE SOUNDS - Ueno, Tokyo.