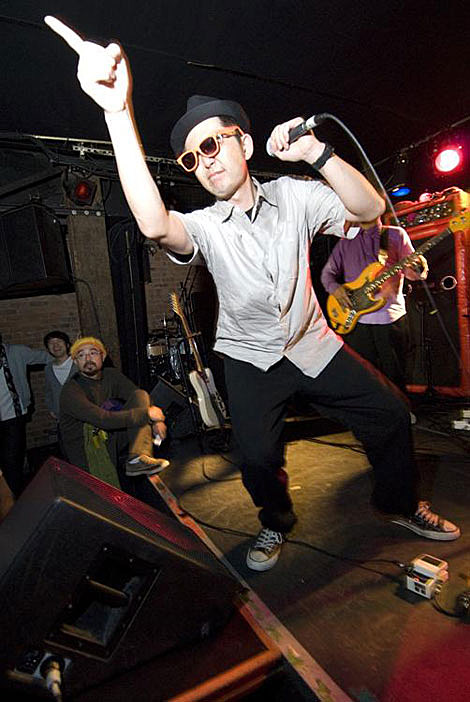 "Zazen Boys were formed in 2003 by Mukai Shutoku, former leader of Japanese rock band Number Girl. In a word, Zazen Boys aspire to be `Led Zeppelin in kimono."

A Baltimore City Paper review of the band's visit to that city (in support of their September 2008 release IV) captures the band's dueling improv-art-rock and dance groove tendencies, with plentiful name dropping:

After a brief introduction in delightfully accented English--"From Matsuri Studio, Tokyo, we are Zazen Boys!"--the quartet first pounded away with some mathy hardcore and obnoxiously endearing noise. In a far-fetched conception, this portion of the band's set was like California's Health, but with dramatically fewer loops and noise explosions; the drummer was adequately primal but keen to all the subtle transitions of art-rock composition.

But as the Boys softened a few of the hard edges and brought out funk fit for dancing shoes, it was possible to view them more accurately as disciples of the Dismemberment Plan, or even George Clinton. The hit "Weekend," with its juicy slap bass, pornographic guitar noise, and bilingual (nearly spiritual) party lyrics, made the show definitely feel like the "buzzworthy" arrival of foreign rock stars. "I Don't Wanna Be With You" was a delicious club number with hip-swerving runway synthesizers and pitch-altered Dan Deacon-esque vocals. It was unexpectedly mind-blowing, a show more than worth the in-box clutter.

At the Cake Shop, Zazen Boys will share the bill with NYC's Frankpollis, and Sweden's Paper who we also recently featured and are playing Cake Shop two other times that week.

Videos from Zazen Boys's 2008 release IV, and those dates in list & flyer format (their only scheduled shows at the moment), below... 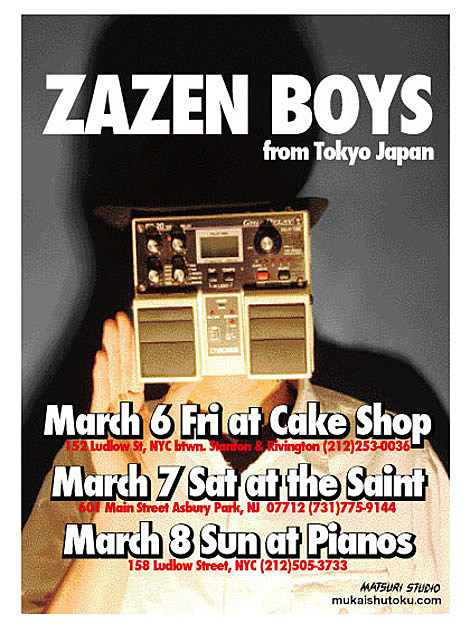