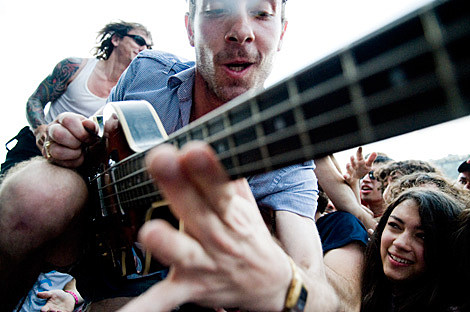 After reading what happened Friday night at Daddy's from the point of view of one in attendance, and then hearing what Nathan Williams aka WAVVES had to say about it, Buddyhead called up Jared from Black Lips to hear how he remembers it....

"First of all, I just wanna say that Wavves was NOT involved in that fight. That faggot didn't even touch me.

I've never "come after" that kid, it wasn't four a.m., that wasn't my girlfriend, no one was spitting, and I didn't attack him. I don't give a shit about that kid and his music.

After that, I went outside and saw their tour manager hanging around with some guys. They started getting all chuckles with me and so I told them I wasn't gonna have it. After that, Wavves tour manager hit me square in the face with a bottle. Blood started pouring out and six dudes fucking started kicking me until I blacked out.

All I remember is getting hit with the bottle and my friends dragging me to another bar. They wrapped my head up until I looked like a Confederate soldier.

So yeah, I lost the fight.

I also missed three flights. I've been in the airport all day having stewardesses cleaning my head because it kept cracking open. You can't go on board if you're bleeding.

Bottom line is that faggot from Wavves didn't even hit me. Never touched me. And he should've, cuz he had a free shot.

PREVIOUSLY: an official statement from WAVVES re: the Black Lips fight