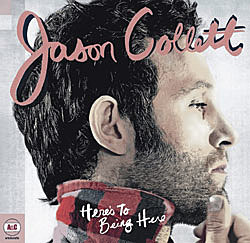 Arts & Crafts is set to release the third collection of new songs by Jason Collett. The new album, titled Here's To Being Here, will be released throughout North America on February 5, 2008.

Here's To Being Here captures the essence of Jason's live performances and features the energy and musicianship of his touring band, Paso Mino. "This is very much a guitar record, in the sense of it being very tasteful...that's the greatest accomplishment of this record" says Collett, "recording in bigger spaces and live off the floor was the ideal I wanted to shoot for with this record. Recording this way allowed for spontaneous creations, which led to many wonderful little accidents."

Here's To Being Here was recorded and produced in Collett's hometown of Toronto, ON, by musician/producer Howie Beck. The album also features guest performances by fellow Broken Social Scene member and Apostle of Hustle front man Andrew Whiteman, as well as Tony Scherr (Norah Jones, John Scofield), Liam O'Neil (The Stills) to name a few.

Jason will be touring North America throughout November, supporting label-mate, Feist, as well as part of select Bluebird North dates. A special series of shows titled "Jason Collett's Basement Revue" has recently been announced for Dec 4, 11 and 18 at Toronto's The Dakota Tavern. Jason will perform songs from Here's To Being Here, as well as many favourites from his previous releases (Idols of Exile, 2005 and Motor Motel Love Songs, 2003) with the help of special surprise guests who will be featured throughout the series.