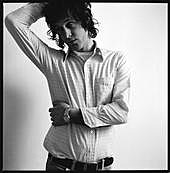 The new Jason Collett album is out now - it's a hit in Canada, he'll be playing a bunch of shows to support it. That includes three NYC shows by Jason in April. Tickets are on sale.

Jason's other band Broken Social Scene is playing Bonnaroo in June. Whether he'll be playing with them there or not is questionable though. More shows he will definitely be at are listed below.....