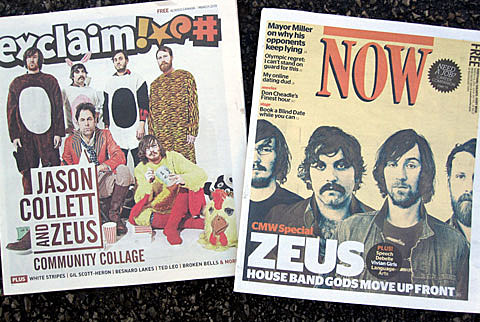 It's a mostly Canadian edition of This Week in Indie, so grab a bag of pickle flavor potato chips and let's dig in. Jason Collett, who is a sometimes member of Broken Social Scene, is here playing tonight (Friday, 4/23) at Mercury Lounge and Saturday (4/24) at Union Hall (tix). Of all the satellite performers of BSS, I think Collett is kind of the unsung hero, making terrific album after terrific album in his understated West Coast country-rock style while Stars and Metric get all the attention. Not undeservedly, necessarily, but Collett's a class act, ace tunesmith, and great performer who deserves a lot more recognition. That includes his new album, Rat a Tat.

As you may have read, Collett is touring with Zeus who used to be his backing band (and will be here) and are really good in their own right. Their new album, Say Us, has a sort of '60s Brit feel, with little moments that make me think of the Kinks, Zombies and late period Beatles. This tour, called the Bonfire Ball, will feature collaborations with Collett and Zeus and, at the Union Hall show, fellow Toronto act Bahamas. (Bahamas aren't playing Mercury Lounge for some reason.) Sounds like a tuneful, convivial evening. 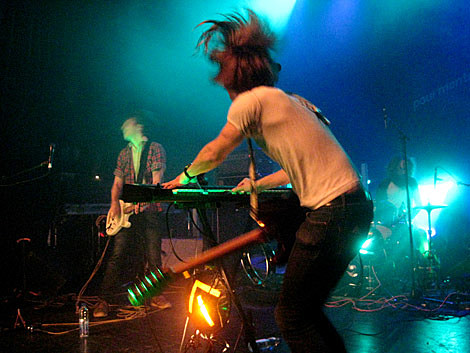 We've written at length about The Luyas being in town for their first-ever NYC shows. I'm kicking myself a little that I didn't go to their secret Loft show on Wednesday (a video is below), but there are plenty of opportunities to see them before they leave. They're playing the teeny tiny Sycamore tonight (4/23), and if you're already going to see The Morning Benders Saturday at Music Hall of Williamsburg, which is/was sold out (tickets back on sale at the moment), do show up early to catch them.

But your easiest opportunity is probably Sunday night (4/25) at Glasslands. As an added bonus, they're playing with their Montreal neighbors Parlovr who I think are pretty awesome and would be worth going to this show just to see them. Here's what I wrote when I saw them at M for Montreal last November:

The band's self-titled, self-released 2008 album does not do them justice, making them sound like a Wolf Parade Jr. Live, Parlovr are way more energetic, fun and melodic -- though it may have also had something to do with a fair amount of new material in their set. Singers Louis Jackson and Alex Cooper semi face each other from opposite sides of the stage rocking back and forth like manic Drinking Birds, flipping their '90s skate rat hair around, while mountain man drummer Jeremy MacCuish holds down the beat. They clearly enjoy playing, and it's a lot of fun to watch too.

This is Parlovr's only NYC show, they just finished up a tour with We Are Wolves and decided to join the Luyas for this last show. It's only $7. Well worth checking out. 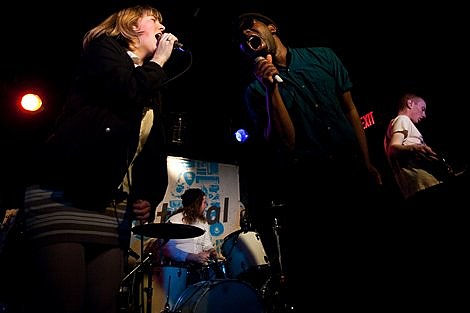 You could do a Montreal triple play (I guess hat trick would be the more apropos sports metaphor) on Sunday if you go early to the WBAR-B-Q and catch Think About Life who are one of my favorite live bands. You have to try really hard to have a bad time at one of their shows. When they played our official SXSW day party this year, I wrote this:

My favorite set of the day came early. Think About Life are so much fun live, so much genuine positivity, it's hard to be in a bad mood with them on stage. An instant hangover cure. I think this was the first time a lot of the audience had ever seen them play, if the number of people who asked me who they were was any indication. At one point singerMartin Cesar left the stage as if their set was over, only to appear in the middle of the crowd dancing, hyping people up. They were the only band that made me forget how cold it was that day.

If you can't drag yourself out of bed in time to make the WBAR-B-Q (gonna guess they're on before 2pm), which is free, Think About Life are back in the city on Tuesday (4/27) playing at Mercury Lounge playing with Chicago's Light Pollution. There's no LOST this week (not that that should ever stop you from seeing this band)...what else you got to do?

Inlets in a loft (more by Chris La Putt) 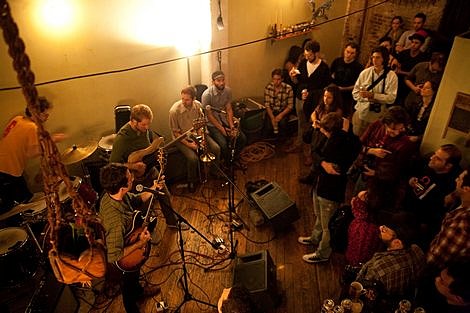 One non-Canadian weekend pick before I leave you. Inlets' debut, Inter Arbiter, was released this week and tonight (4/23) is the official release party at Union Hall (with Sparrow House). You can listen to the whole thing over at Spinner. It's a lovely listen, baroque pop with amazing harmonies. I've personally never seen them live and am curious to see how much of this they can reproduce live. I'd imagine that at the record release party there might even be special guests. I am not privy to any inside info,  but Zach Condon [editor's note: whose arm was in a sling at the April 12th John Shade show at Mercury Lounge] and Angel Deradoorian do play on the record (and Sufjan Stevens was there to see them at our CMJ loft party).

And don't forget about Saturday night's (4/24) Bruar Falls One Year Anniversary Party with Micachu & the Shapes, Holiday Shores, Beach Fossils and... balloons! It's free and I have a feeling will be crazy packed (and probably quite debauched) so get there early.

That's it for this week. Some videos and flyers are below...

Jason Collett - Love Is A Dirty Word from Arts & Crafts on Vimeo. 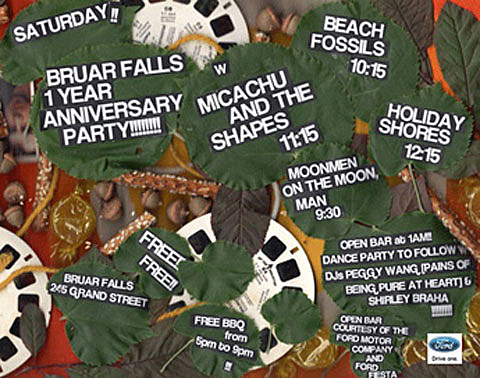 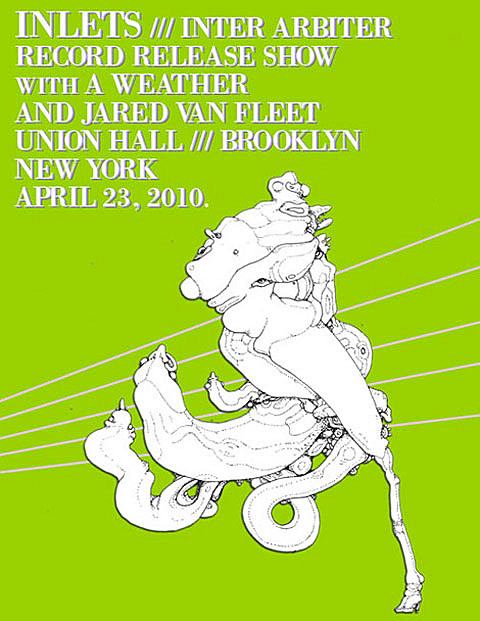 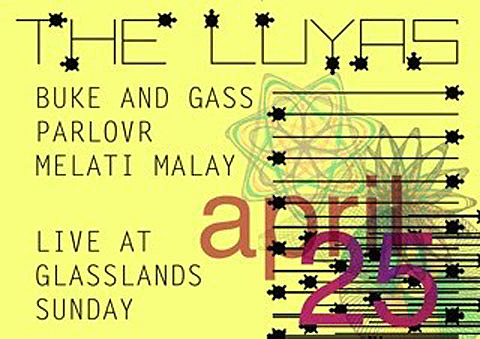