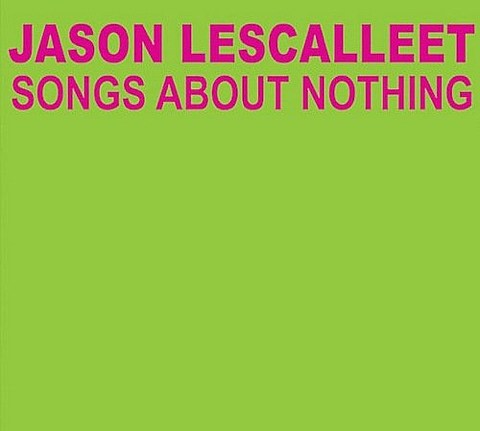 Hands down, the most intriguingly difficult album I encountered last year was Jason Lescalleet's massive double album, Songs About Nothing. The title and album cover was an obvious riff on Big Black's Songs About Fucking, as were some of the song titles (Big Black's "The Power of Independent Trucking" gave us Jason's "The Power of Pussy" and "The Beauty of Independent Music"). But while Big Black gave us abrasive in-your-face noise, Jason withheld, creating noise that slowly built up into one of those feedback sounds a singer's mic makes at a show and causes the whole crowd to yell "ahh!" and plug their ears. If it doesn't sound like a nice thing to listen, that's because it isn't. But there's something alluring about the record that after successfully scaring you away, eventually pulls you back in. You can stream three of its tracks below.

Jason will be in NYC for a show with a great lineup of fellow experimentalists, Wolf Eyes main man Nate Young, and two regulars on the NYC noise scene, Spencer Yeh Trio and Pharmakon. Tickets for that show are on sale now.

The 285 Kent is Jason Lescalleet's only show that we're currently aware of. Song streams below...

Jason Lescalleet - "The Power of Pussy"