Javelina at The Charleston (more by Chloe Rice) 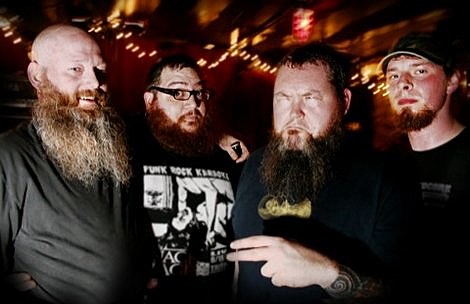 If you aren't a total a-hole nerd like me, eagerly awaiting the new episode of Lost... then a band you should NOT miss is the great Javelina (not to be confused with Javelin), who will barrel their way through Fontana's on Feb 2 (Tuesday) as part of the monthly FREE Tones of Death Party. Along for the ride on the support tip are The Hixon and The Judas Syndrome as part of a CD release party for Charred Walls of The Damned, a new project featuring Richard Christy (Death, Iced Earth), Steve DiGiorgio (Death, Autopsy, Sadus, many others), Tim "Ripper" Owens (Judas Priest, Iced Earth), and Jason Suecof.

Javelina released one of my favorite LPs of 2009. Bassist/vocalist Herb Jowett also talked about HIS favorite LPs with us.

Shortly after the band headlines Fontana's, the Phily crew will begin them jawns down south to tag Austin for SXSW. More details on that are on the way, meanwhile dig on full tour dates and some videos below...