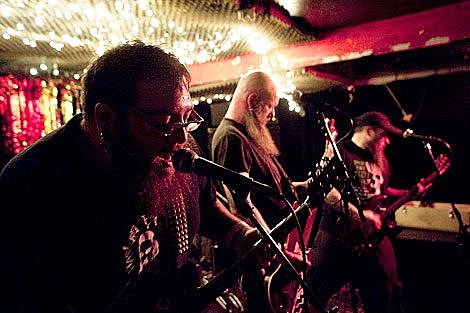 How do you make a big show bigger? We are happy to confirm the additions of Javelina and Hot Graves to the previously announced Floor + Unearthly Trance lineup at Europa on June 26th! Tickets are still available. The EARLY SHOW (begins promptly at 6!) will be Javelina's second Northside appearance, having played the BV-BBG Northside show last year at Europa.

Speaking of Unearthly Trance, Ryan of UT serves as bassist/vocalist for Pollution, who will be at Acheron TONIGHT (6/18) alongside Vancouver's White Lung, the conclusion of an east coast tour for the pair (that kicked off at 538 Johnson on 6/10). White Lung has a west coast leg of a US tour scheduled for early July, which kicks off at Sled Island on July 3rd alongside Fucked Up, Built To Spill, Dinosaur Jr, Ted Leo & the Pharmacists, The Melvins (who play NYC tonight also), and so much more. White Lung are touring off of their freshly minted Atlanta 7", out now via Deranged.

For Pollution, this is currently the only NYC date on their calendar, but the band will also play the incredible Dudefest 2010 in Indianapolis this year alongside Arab On Radar, Trap Them, Voetsek, and many others.

Uneathly Trance is also scheduled to appear on July 30th at the Lee Altomare benefit in Amityville, NY alongside the reunited Deathcycle, as well as Altomare's band The Communion, Sick of Talk, Thought & Memory, and Blood of A Zombie. All proceeds will go towards, St. Jude's Children's Hospital and Research Center. Deathcycle will play NYC the next night (7/31) SANS UT, but with rest of the set of that bill (and another TBA) at 538 Johnson.

Tour dates and some video is below....