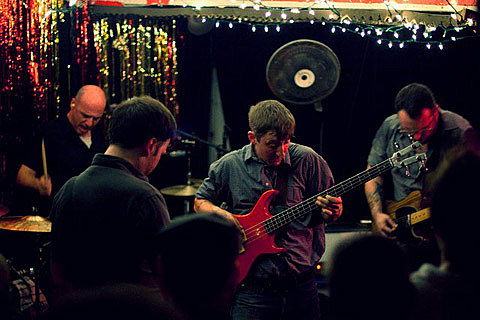 BELLS (mems Jawbox/Oxford Collapse) will play Bruar Falls on July 30th as part of a "rock and roil CRAB BOIL" at the venue. The show, headlined by Mcdonalds (who you can read more about here), will also feature a solo appearance from Bells member/cellist Gordon Withers. Gordon, who you may know for his cello Jawbox covers, now also plays with with J. Robbins in Office of Future Plans and with Zac Barocas in BELLS. Moonmen On The Moon, Man are also on the Bruar Falls bill which features a meal as described in the name of the show.

Speaking of Jawbox, Dischord remastered and reissued two singles at the end of May. Speaking of Dischord, Title Tracks are on tour and in NYC this weekend.

Office of Future Plans has three shows coming up, but still none in NY. They're listed below.

BELLS released their debut There Are Crashes EP last year, and are currently writing new material. Stream that EP and the Gordon Withers Jawbox covers LP below.

It Feels Too Good To Believe (mastered) by mcdnalds