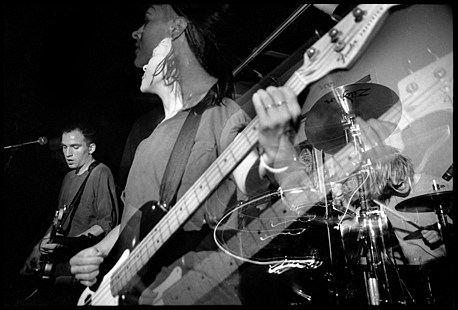 Pioneering Washington, D.C.-based rock band Jawbox will make its first appearance of any kind in 12 years when it performs Dec. 8 on NBC's "Late Night With Jimmy Fallon."

For now, there are no concrete plans for additional shows from Jawbox, who along with Fugazi and Shudder To Think was the third pillar of the hugely influential DC hardcore scene in the early 1990s....

As a precursor to the "Late Night" performance, Jawbox will on Nov. 23 reissue its 1994 major-label debut, "For Your Own Special Sweetheart," on Coletta and Barbot's own Desoto Records label, complete with the three bonus tracks from the "Savory +3" EP: "68,""L'il Shaver" and a cover of the Big Boys' "Sound on Sound." [Billboard]

Jawbox was literally one of my favorite bands of the era, both live (Jawbox/Jawbreaker tour was particularly amazing) and on record (For Your Own Special Sweetheart is a certified classic) . It's kind of odd to think of Jawbox reuniting for Jimmy Fallon (WTF), but if it leads to a show or two, I am definitely down.

J Robbins went on to join Burning Airlines, Channels and be a producer for various bands including Clutch, Modern Life Is War, Jets to Brazil, Against Me!, The Promise Ring, and many others. Robbins's son Callum was born with Spinal Muscular Atrophy, and has been the subject of many benefit shows that have included reunions of Snapcase, The Dismemberment Plan, and others.