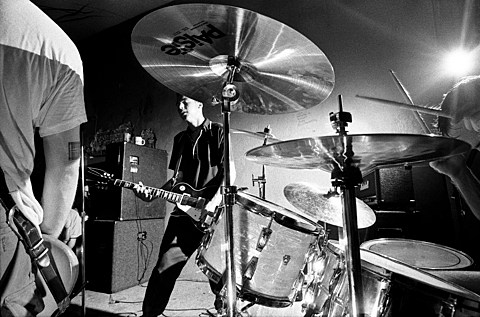 As discussed, Jawbreaker are reissuing their classic Steve Albini-produced 24 Hour Revenge Therapy for its 20th anniversary this week (10/14) via Blackball, and now the band have launched a new website which features a pre-order and streams of alternate versions of "Boxcar" and "Do You Still Hate Me" which will appear on the reissue. Head HERE to listen to those and HERE to pre-order.

If you're in LA, there will be a release party for the reissue there on Saturday (10/18) where drummer Adam Pfahler will be in attendance to give a talk, slide show, signing and do a Q&A. Adam also recently spoke to AltPress about the reissue:

Did you have any sense of how important of a record 24 Hour would be for the band once you were done?

Honestly, I don't think we had any idea where that record would take us. I knew that we made a good record, though. I always felt really strongly about that. I actually remember sitting down with Gary Held [from the band's then-label Tupelo/Communion]. We invited him over to practice one day and said, "This is what the next record is going to sound like," and we played it for him in our practice space, right there, in sequence. We knew exactly how we wanted to put it out. Of course some things changed, but we were like, "This is what it is, are you cool with this?" And he was like, "Absolutely." [Laughs.] At the time, it felt like you could shoot a gun in the air and hit a great song that Blake had just written.