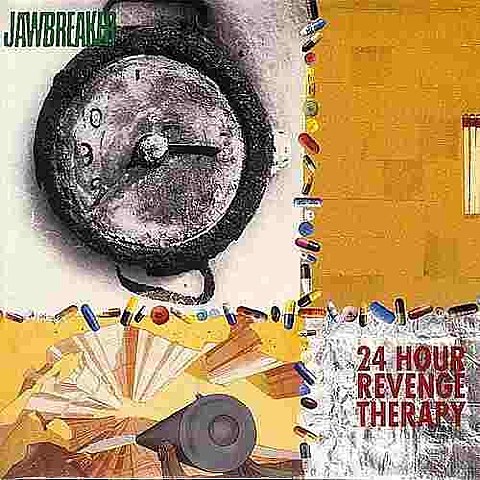 Jawbreaker already reissued Bivouac (+ the Chesterfield King EP) in 2012 for its 20th anniversary, and now they'll be doing the same for 1994's classic Steve Albini-produced 24 Hour Revenge Therapy, as Property of Zack points out. The album comes with alternative takes of four of the LP's tracks, plus two outtakes, "First Step" and "Friends Back East" (which both also appeared on 2002's Etc. compilation). It will be out on October 14 via Blackball Records and can be pre-ordered at Music Direct. Music Direct also mentions that a full-length documentary on the band is in the works. Tracklist and some classic 24 Hour Revenge Therapy streams below. Also below is a funny and entertaining video of a 1994 interview Jawbreaker did on Public Access TV show Sideshow, the show run by Stefanie Reines (interviewer) and her brother Richard (cameraman), who two years later founded Drive-Thru Records together.

In related news, Jawbreaker drummer Adam Pfahler recently formed the band California, which is fronted by Green Day's touring guitarist Jason White, and features Dustin Clark (The Insides) on bass. (Meanwhile, Green Day's singer is currently The Replacements' touring guitarist.) The band have been working on their debut record, and while there's no music from that out yet, you can watch a live video of them playing "Woodson Lateral.: It's not the highest quality video, but it does sound promising. Check it out below.