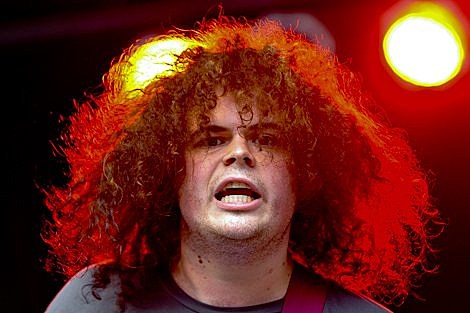 eMusic: Judging by the altercations you've had with a few of your fans, it can be tough walking around with a moniker like Reatard.

Jay Reatard: Their perception of the name, which I think of as being just mildly offensive, is what puts those negative thoughts into their heads. They anticipate something completely different from reality, and they react that way.

When I first started the Reatards, I just wanted to get to make a record. As long as I could survive until then, I could make that one and then survive until I made the next one. A lot of that early work was focused on being youthful and ignorant -- feeling immortal and thinking I could get away with whatever I wanted. After I turned 26 years old, I started thinking about things a little differently. I started to realize I'm not going to live forever, my heath is going to fail, I need a place to live. So either I grew up, or society broke me down. Either way, I started thinking more about my future, which was the opposite of everything else I'd ever done.

At this point, it would be easier to get to certain levels in the music industry if I wasn't called Jay Reatard, because it's an immediate turn off. I would definitely be playing to larger crowds, and have more money. Everything I didn't care about when I first called myself Jay Reatard, I could have more of now. But I'm fine with it -- I look at it as a litmus test for assholes. If you can't get past the name, then you can't afford the price of admission.

Jay Reatard's new disc, Watch Me Fall, is out August 18th on Matador. NYC will get a free listening party for the album at (Le) Poisson Rouge on Monday, August 17th, while the West Coast gets a slightly better deal. Jay Reatard will be playing a series of free record shop in-stores from LA to Vancouver through the end of August. Those dates are below.

This September, Jay Reatard reunites with his first band, the Reatards, for a set at Goner Fest in Memphis.

On Thursday, October 1st (a few weeks before CMJ) he'll headline a Shattered Records showcase (his imprint) at (Le) Poisson Rouge. Also on that NYC bill are Box Elders (who have other NYC dates coming up too), Useless Eaters, Hunx and Nobunny (both featured HERE). Doors are at 11:00pm. Tickets are on sale.

Two tracks off the new album, including the first single "It Ain't Gonna Save Me," are above. The video for that song, with the trailer for "Waiting For Something," a short documentary about Jay Reatard, and all tour dates are below...

TRAILER: "Waiting For Something", a Jay Reatard documentary

Jay Reatard - It Ain't Gonna Save Me