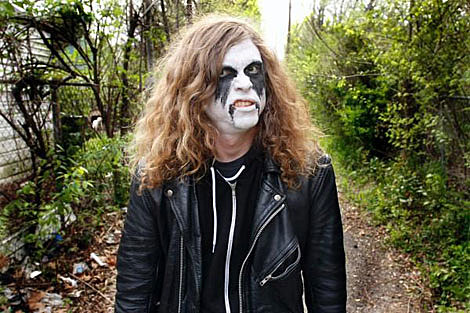 Shattered Records also announced it will release "all 20 of Jay Reatard's albums" digitally, plus a new singles series and subscription club. The new site is offering new Reatard single "You're Gonna Lose" free to those who sign up for its mailing list. Full info below.

Jay Reatard is going on tour in June and July. That includes two NYC shows. The first, on Wednesday, July 1st, will take place in Stuyvesent Town! That one, billed as a "Stuytown Oval Concert", will presumably be free, outdoors, and have a mosh pit full of babies. The second will happen at Brooklyn's Music Hall of Williamsburg, one day later, on Thursday, July 2nd . Tickets for that go on sale Wednesday, April 12th at noon. TV Smith opens both NY dates.

Full Shattered Records press release, and all tour dates, below...

Jay Reatard, the "king of the rock and roll single" (Los Angeles Times) is putting a striking focus on both vinyl and digital releases in 2009, set to be the breakthrough year from the prolific Memphis-based indie/pop/punk songwriter. Today he relaunches his own Shattered Records label (2004-2007) to re-release his back catalog and will soon release new singles and albums from some of the best artists in punk, garage, and indie music.

Shattered Records' digital store opens today featuring his entire 20 album catalog, including many out of print for years and some that have never been available digitally before. Many of these releases are exclusive to the Shattered Store. A brand new 14-song digital-only collection of Jay's music from 1998-2007, entitled Greatest Messes, is available starting today for just $7.99, only at jayreatard.com. More nuggets from Jay's 50 7"s and EPs, never before available digitally, will be added in the coming months.

Jay also proudly announces The Shattered Single Series, consisting of six 7"s from artists hand-picked by Jay including Jeffrey Novak (from Cheap Time), Nobunny, Hunx, Useless Eaters, Box Elders, Earthmen & Strangers, and legendary New Zealand lo-fi songwriter Chris Knox. Each will be available in a limited run 500 7"s and as a digital single. Shattered Records will also release the debut solo album from Jeffrey Novak, entitled After The Ball, in May.

As exciting is The Shattered Subscription Club, featuring many exclusive releases for Shattered members only. For an annual subscription of $75.00, Shattered fans will receive: