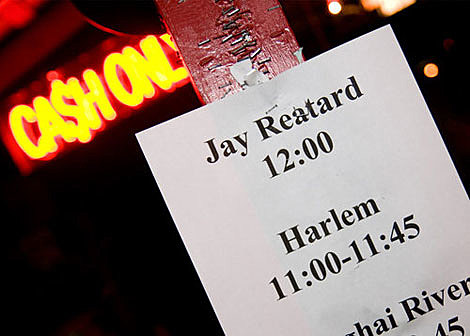 "While [Jay Reatard's] set [at Emo's in Austin on Wednesday night] had all the makings of a fun night of pop-punk, it was sadly abridged at only 40 minutes -- less than the opening performance by Austin's own Harlem -- after two rowdy fans attacked Reatard on-stage shortly after he announced he was playing the night's final song. He retaliated by swinging his microphone stand and departed mid-song, giving the at-times rambunctious audience the finger as he exited the stage. There was to be no encore -- the lights went up and the PA music kicked in as the two intruding fans were arrested by police outside the club's Sixth Street entrance.

It was a good show -- while it lasted. And Reatard can't be held responsible for violent fans. But at less than 45 minutes and with a buzzkill of an ending, it's hard to regard the night as anything more than an initially promising disappointment. That's the sad thing about punk rock -- sometimes the anger overtakes the fun and an audience walks away let down. With a too-short set and a combative ending, Reatard's Wednesday night show ultimately felt less like a satisfactory set from a skilled player and more like a sad tease of the fun evening that might have been.

Update: The Austin Police Department's public information office has confirmed that Michael Buehrer, 20, and Peter Aravello, 23, were the two men arrested. Both have been charged with public intoxication.

Pitchfork has this statement from Reatard's publicist: "Jay was attacked, totally unprovoked, by two different people, both of whom were later arrested. One guy bolted onstage and came swinging at Jay, but security took him away pretty quickly. Soon after (the band hadn't stopped playing, by the way), another guy sprinted onstage and hit Jay. Unlike the first guy, Jay didn't even see this guy coming. So Jay defended himself with the mic stand until security took that guy away, too. Jay is safe and unhurt, and the cops were there for about an hour afterwards." [Austin 360]

I don't think Jay usually plays much longer than that anyway. Harlem, who were last here to play their label (Matador)'s showcase during CMJ (Jay is on Matador too), visits NYC again to play Mercury Lounge on February 10th. Tickets are on sale.

Jay's next and only upcoming show is opening for Spoon (like he did in Brooklyn once) at the Riverside Theater in Milwaukee, Wisconsin on New Years Eve.

Harlem will announce more 2010 dates soon in support of their 2nd album, 'Hippies' which "hits North American record shops, farmers markets and digital storefronts on April 6 on the always popular LP, CD and MP3/FLAC configurations." MP3 from that album above. Cover art below... 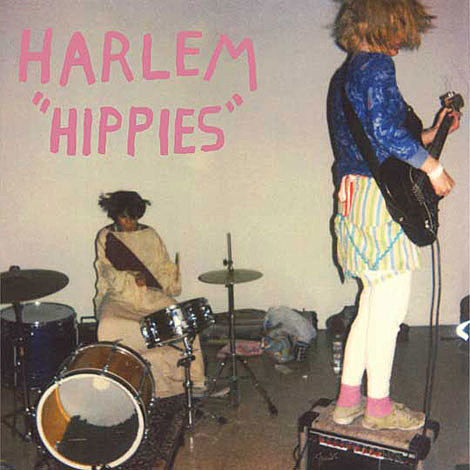