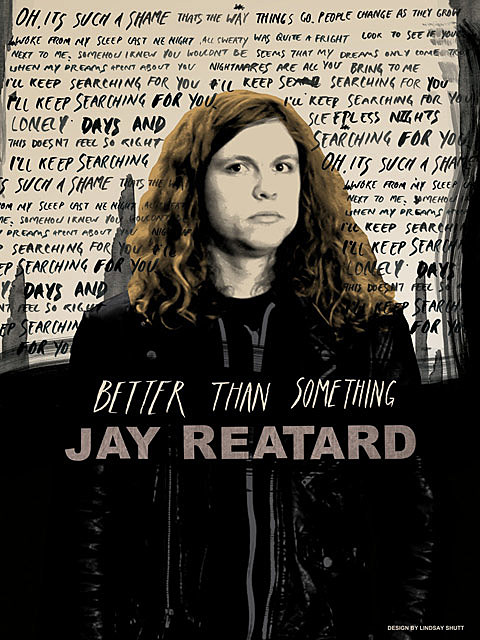 The Jay Reatard documentary Better Than Something shows tonight (11/8) at the IFC Center at 8:30 PM. (It also showed this past Friday.) The film began as a short film to help promote Jay's final album, Watch Me Fall, but directors Ian Markiewicz and Alex Hammond decided to expand it to a feature film before his untimely death last year. IFC.com interviewed Markiewicz and Hammond about the film:

IFC: Your film started out as a short called "Waiting For Something." At what point did you realize that you had enough for a feature?

AH: At first they were like, "This is going to be like an EPK," but Jay didn't want a typical EPK. It started out as an eight to 10 minute piece, and then when we came back we said, "Holy shit, we don't have a 10-minute short, we have a film here."

IM: He kept bringing up this "warts and all" idea. He was like, "This has to be raw and rough." He kept saying things like that, and it turned out like that because he wanted to unload his whole story. He just really unleashed. That's the only word for it.

IFC: Obviously the nature of the project changed after Jay passed away. Did you begin seeking out his friends and family members immediately afterward?

AH: The moment we heard about his death, we weren't thinking about the film. Two months later, his friends were doing a big tribute show for him at South By Southwest.

IM: To be honest, I felt like, I don't know if I can handle looking at that stuff right now. It felt very dark at that point. And people were saying, you guys really have to be down here for this show. It kind of snuck up on us, like, "Okay, I guess we're doing this now." When we started doing it, you could just feel how palpable the emotion was coming off everybody. The wrong thing to do would be to wait a bunch of years, and then do something, when everybody's feelings weren't as strong. It seemed more in the spirit of what Jay did, being in the heat of the moment.

Before tonight's screening there's a pre-show party at Other Music starting at 6:30. Golden Triangle's Alix Brown DJs and there's complimentary PBR. No word on a DVD release date yet. Trailer for Better Than Something is below...

--
Better Than Something: Jay Reatard trailer