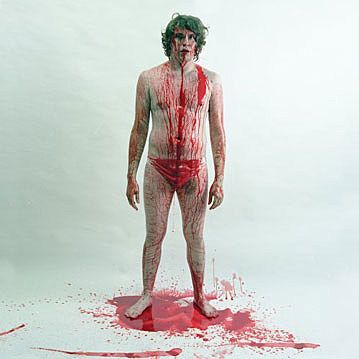 As first pointed out in the comments last week (and again), Jay Reatard has been captured on tape physically abusing fans that get too close, and things got crazy recently in Toronto. Did he abuse anyone last night at Bowery Ballroom? Will he hurt anyone at Europa in Brooklyn tonight (April 22, 2008)?

"Last night's show in Toronto got completely fucked up. The Silver Dollar holds 190 people but Craig Laskey the promoter let 350 people in there. That's cool if there's some sort of security or crowd control - we don't need people getting so wild they jump on stage and smash our gear - but that's exactly what happened. Right when we started playing someone pushed the monitors right on top of Stephen and on to his pedals - breaking them, people were throwing beer bottles at us, a someone jumped onstage and smashed my pedals, another guy took a full pitcher of beer and dumped it all over the rest of my pedals, and then threw it right at my Flying V, breaking the pickup and the input electronics. After three songs all our gear was smashed and unusable. Even when shit gets that crazy at Circle Jerks show there's at least some security but when I asked Craig Laskey about it before the show he told me "I thought you guys were a garage band." When we couldn't play anymore I hung out and talked to people, refunded people's money out of my own pocket, and tried to borrow gear and finish the set a bit later but Dan Burke wouldn't get off the stage, too busy talking trash about me.

I'm getting really sick of shit like this happening. We'll come back in Toronto soon and do a free show to make it up to the real fans in Toronto. And we'll steer away from greedy promoters who don't have any control of their shows and who don't care about doing right by the audience." [Jay Reatard]

Jay Reatard - Kicks a dude in the face in Vegas!

Jay is playing Prospect Park with Spoon and the Constantines this summer.

BONUS: VERY NOT SAFE FOR WORK