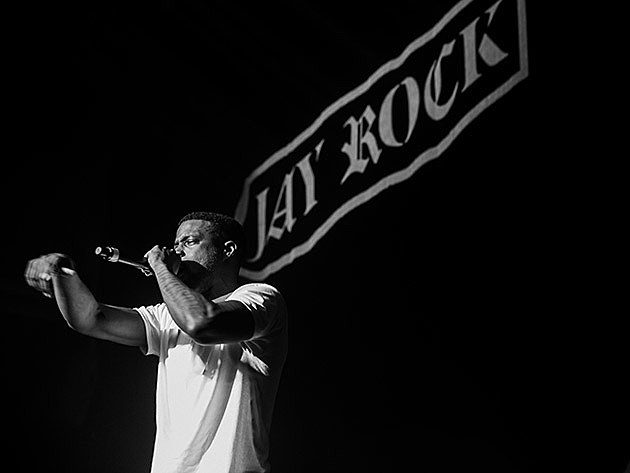 Jay Rock just wrapped up a tour supporting fellow Black Hippy member Kendrick Lamar, which hit NYC at Terminal 5 (pictures). (We also caught the tour in Chicago and Austin, which did not actually have Jay on the bill.) Now he's set to had out on his own headlining tour of smaller venues. It's just four dates and happens in the Northeast US this month.

It kicks off in Poughkeepsie, NY on 11/21 and then ends in NYC on November 25 at SOB's. Tickets for that one are on sale now. All dates are listed below.

Jay finally released his new album 90059 earlier this year. It's the followup to his 2011 debut Follow Me Home on TDE/Strange, and it makes him the last Black Hippy member to release a new record since the group's major breakthrough (which we can probably credit to good kid, m.A.A.d city, the home of Jay Rock's memorable "Money Trees" verse). All of Black Hippy is on it, plus Isaiah Rashad, SZA, Busta Rhymes and more. Talking about the album on Complex, Angel Diaz writes:

Jay Rock might not be the biggest star on TDE, but he is their leader. Each artist on the label's roster learned the game from him. He was with the imprint from the start and took all of them under his wing so they could learn from his experiences. Listening to this album, that statement becomes apparent in his ability to see both sides of the game. We get Jay at his best when he spits that OG knowledge.