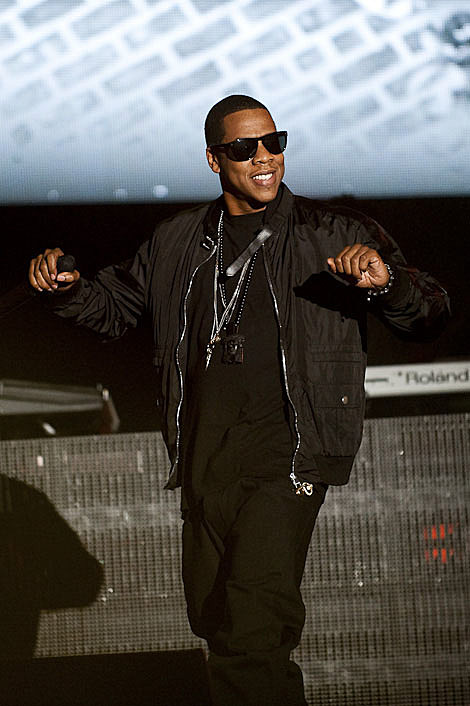 Brooklyn's own Jay-Z opened up his headlining set at All Points West on Friday night with a cover of the Beastie Boys classic "No Sleep Till Brooklyn". Was it a fitting tribute to the group that he replaced on the lineup (due to MCA's diagnosis of cancer) or was it Jay-Z's way of reminding New Jersey what he plans on doing with the Nets? OK, I'll go with the former, and it was our own great Jay-Z festival moment (at his first-ever US festival appearance). The UK's Glastonbury got the (less sincere) tribute to Oasis in 2008.

Speaking of Glastonbury, All Points West got its mud... which came from the rain that miraculously cleared up before Hova took the stage (at which point he covered "No Sleep" with the "Beastie Boys at the Garden" line in the first verse changed to "Jay-Z at All Points West.", and then...)

Immediately after that, he performed his own "Brooklyn (Go Hard)."

Later, he dedicated his entire set to Beastie Boy Adam Yauch. It was Yauch's illness -- he has been diagnosed with a cancerous tumor in a salivary gland -- that forced the group's cancellation, last week.

Tons more pictures coming soon. All our APW coverage HERE. Hopefully you didn't throw away your Friday ticket. Saturday's schedule HERE. A few more videos from Friday (including a clip of No Sleep) below...