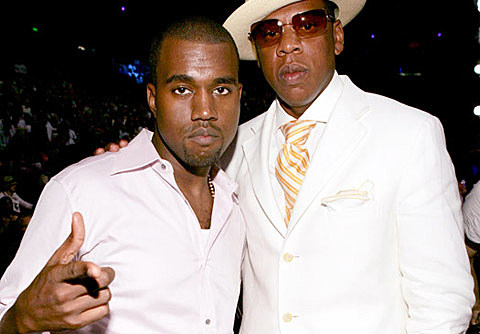 The Throne (aka Jay-Z & Kanye West) have rescheduled their original set of dates to kick off in late October. The current schedule is listed below and "more dates to be announced soon". The new set of dates include NJ's Izod Center on November 5th & 6th (instead of September 27 & 28). Tickets for both dates go on presale at 10AM with the password "WTT".

Meanwhile, much like the Jay-Z/R.Kelly tour there are reports that the partnership isn't going so swimmingly...

A battle royal has broken out behind the scenes of Jay-Z and Kanye West's new album, "Watch the Throne."

Sources say the rappers -- who call themselves The Throne and are releasing their expected blockbuster collaboration Aug. 8 on iTunes and four days later everywhere else -- are barely speaking to each other as they iron out the details of their upcoming tour...

The sources say West wants flashy concerts with "next-level production," which would cost more than $400,000 per show. Jay-Z is said to be meticulous about costs and already has a larger, long-term advance from Live Nation that he has to pay back.

"Jay-Z can't deal with Kanye," an insider told Page Six. "Jay is a stone-cold businessman. He wants to recoup all of his money from Live Nation. But Kanye wants to upstage rock stars with a blowout show. He doesn't care about costs. He has a lot less to gain from the shows."

West is expected to agree to the conditions of the tour next week, but the business brouhaha between the powerhouse artists might have affected their backstage relationship.

Industry insiders were shocked to see West and Jay-Z perform separately with Young Jeezy last Monday night at the Highline Ballroom [a private event]. "We were expecting them to come out together to perform a track from the album," a source said. "They didn't even go out together after the show."

"Jay-Z is fed up with West's antics," another source said. "He doesn't even want to be around him." However, the two are expected to perform together at a listening party tonight at The Rose Planetarium in Central Park, according to The Post's Dan Aquilante. A Live Nation rep said, "No comment." The rappers' reps didn't get back to us.-[New York Post]

Jay-Z denies the beef and said Kanye is a genius. Jay & Ye hosted a private listening party at The Rose Planetarium in Central Park last night (8/1). According to attendee Erin Carlson, "Contrary to reports, they seemed to be getting along...." Contrary to rumors before the event, they did not perform. "Watch the Throne" is out August 8th via iTunes.

Videos from that private Young Jeezy show at Highline Ballroom last week (7/25), which featured appearances from Bun B, The Lox, Fabolous and others in addition to Jay/Kanye, are below alongside all tour dates.