"A fucking DISASTER! According to hitsdailydouble, Jay-Z sold 133,146 records last week, a whopping drop of 81%. In other words, ALL BETS ARE OFF! Turns out the old paradigm of tie in with everybody, get on every TV show, there’s no such thing as overexposure, is trumped by the TRULY old paradigm, as in YOU NEED A HIT! And Jay-Z just didn’t deliver one." [Lefsetz]

And then there's this doll designed by eric so.... 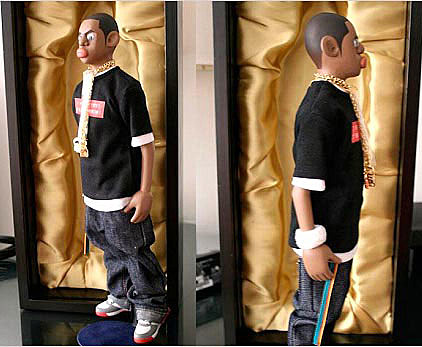 "Lmao… first Mel Gibson then Michael Richards and now the new Jay-Z doll! Yes, it's suppose to hit stores for Christmas, and the doll has bulging eyes and huuuge lips! I don’t know if they are trying to make the doll look really like Jay, or they just want to follow the stupid cliché that all black men have 'bulging' eyes and 'big' lips, I don’t know how to feel about this." [DX Dirt]

"The figurine was said to be a one of a kind gift from So to the rapper." [hoodTalk]