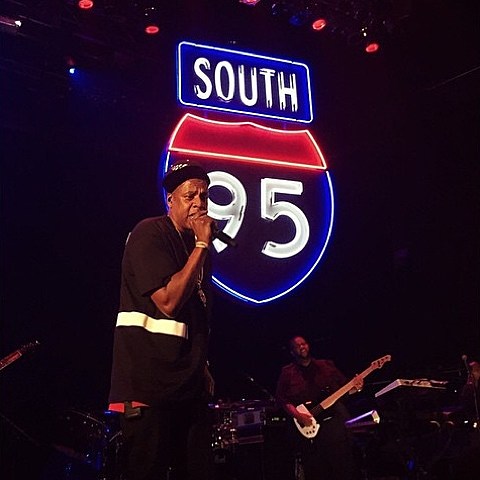 Jay Z's intimate "B-sides" shows happened at Terminal 5 on Saturday (5/16) and Sunday (5/17). Jay promised a night of older songs and deeper cuts, and he followed through on that promise with "Young Gifted & Black," "Streets Is Watching," "Friend or Foe," "Show U How To Do This," and a lot more. He did do some big hits like "Clique," included a few freestyles, brought out Memphis Bleek, Beanie Sigel, Young Jeezy, Jay Electronica and more, and held a moment of silence for the late BB King. You can watch a video of the full night 1 set and check out the setlist, below.

Jay Z at Terminal 5 - 5/16/15 Setlist (via)
B-SIDES ACT I
Dynasty Intro
Young Gifted & Black
Pump It Up (Freestyle)
Streets Is Watching
Friend or Foe
Where I'm From
Say Hello
TiDAL Freestyle (Jay-Z also addressed Spotify and YouTube)
Politics as Usual
Guess Who's Back
Show U How to Do This
Jigga My Nigga
Hovi Baby
22 Two's
U Don't Know
Intro / A Million and One Questions / Rhyme No More
So Ghetto
D'Evils
This Can't Be Life
Party Life
Success
Ignorant Shit
Grammy Family (Freestyle)
Takeover
You, Me, Him and Her (with State Property) (With Memphis Bleek, Beanie Sigel, Young Chris, & Neef)
What We Do (Freeway cover) (performed with Roc-A-Fella crew)
Clique (Kanye West cover)
I Made It (with Jay Electronica) (Freestyle)
Exhibit C (Jay Electronica cover) (with Just Blaze) (Just Blaze and Jay Electronica performed)