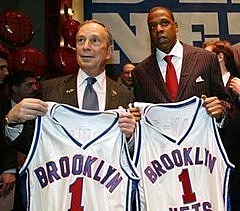 Rap mogul Jay-Z will christen the Barclays Center when the under-construction $1-billion home for the Brooklyn-bound Nets opens on the corner of Atlantic and Flatbush avenues next fall.

The hip hop star, who owns a very small portion of the basketball team, will headline the venue's first performance during a three-week grand opening at the Prospect Heights arena in September, 2012, according to a source familiar with the plan.

Jay-Z is set to announce the dates at a press conference at the Barclays Center on Monday -- where Nets officials are expected to unveil a new team name.

It will be a "major announcement," Nets CEO Brett Yormark tweeted.

NY1 is reporting the same. Meanwhile Jay is on tour with Kanye West.