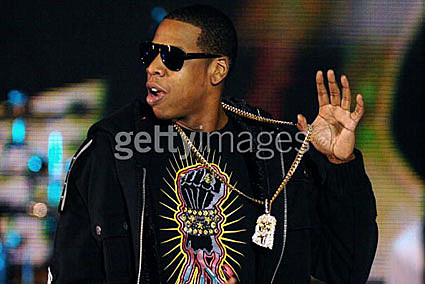 I've known about tonight's (Nov 11, 2007) Jay-Z show at Hammerstein Ballroom since the day it went on sale, but it was sold out by the time I realized it was happening. The same thing happened when Jay-Z played Roseland last year, and when he played Radio City before that - both were sold out before I knew about them. Then yesterday I noticed yet another show - Sunday November 13th at the Apollo Theater - apparently just added, but also sold out by the time I saw it. Hopefully one day I'll be able to post about Jay-Z tickets going on sale in advance, but for now all I got for you is Craigslist.

Jay-Z also performed a show at Steiner Studios in Brooklyn in late October - a taping for VH1's "Storyteller" series (which debuted on November 8th). Photo above. Video, and more info, below. American Gangster is out now.

NEW YORK (AP) — Jay-Z went back to Brooklyn to give fans an early listen to some of the music on his upcoming album, "American Gangster."

On a studio lot for VH1's "Storytellers" series, Jay-Z, along with a full band, performed several tracks from the album inspired by the upcoming Denzel Washington-Russell Crowe flick.

"American Gangster," in theaters Nov. 2, chronicles the rise and fall of notorious Harlem drug lord Frank Lucas. Jay-Z said watching the film made him reflect on his own drug-slinging days and the dangers of that lifestyle.

"I was watching the movie and I was pulling emotions from the film," the 37-year-old rapper told the crowd, which included girlfriend Beyonce, on Wednesday night.

Among the new songs he previewed were "Pray," "Dreamin'" and "Party Life," and another about addiction.

"Can I get my Lindsay Lohan on?" he joked before launching into his rap, though he quickly added: "I definitely went too far ... I might have to edit that."

Between explaining the songs, the rapper also talked about the state of the rap game.

"I know there's a whole thing on censorship; this album is an easy target. I think it's misplaced," he said. He also seemed to criticize those who are against the use of the N-word in rap lyrics, noting there are other hurtful slurs in the language: "What are we going to do, take every word off the table?"

Jay-Z stressed that "American Gangster," due out Nov. 6, is an album with a story from beginning to end — something he says too many rap discs lack.

"I'm not knocking the way anybody makes (their music)," he said, "(but) I think a body of work is what the game needs right now."