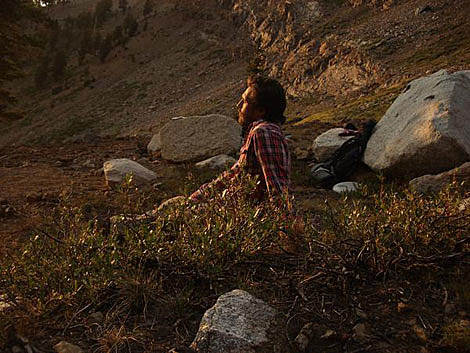 Though Montreal singer-songwriter Jesse B. Marchant reports that he spent little time in church growing up, he both lived and recorded his debut album, Not Even In July in Henry Hirsch's church studio in Hudson, NY, often stepping outside only in the mornings to get breakfast. After living in Los Angeles for much of the song-writing process, taking up residency in a church built in the late 19th century was a nice change of scenery for Marchant, who came to find the social climate in L.A. not to his liking. Not only was the church an amazing setting for its acoustics, Marchant grew to appreciate its peaceful and historical aura." [NPR]

Spin if you like Jim James, My Morning Jacket, Ryan Adams, Paul Simon, Cat Stevens and especially Jose Gonzalez. JBM plays Mercury Lounge in NYC tonight (4/25). He goes on at 8 and shares the bill with Ravens & Chimes and Kittens Ablaze.