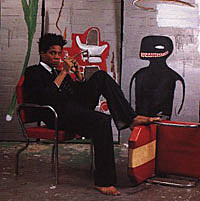 Through June 5th, 2005, the Brooklyn Museum has a special "exhibition of Jean-Michel Basquiat's paintings, works on paper, and sculptures." The exhibition will eventually move to the MOCA in LA (California) and the MFA in Houston (Texas).

Those in NYC can go see it free tonight (Saturday May 7th, 2005) as part of the museum's First Saturdays program. (If you didn't already know, the museum has a big free party (with musicians) every first saturday of the month.)

Those everywhere can learn about Basquiat and check out the collection on a special website.