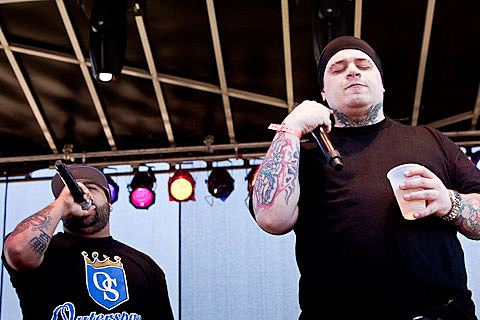 Jedi Mind Tricks will celebrate the most evil of all holidays with Halloween Havoc, a string of tour dates that will include Bowery Ballroom on 10/30. Tickets go on AmEx presale at noon Wednesday (9/1) and regular sale on Friday (9/3) at noon. All dates below..

Vinnie Paz of Jedi Mind Tricks released his solo debut in June entitled Season Of The Assassin. The LP features appearances from Clipse, Beanie Sigel, Freeway, Paul Wall, and others along with production from DJ Muggs, Madlib, Lord Finesse, Da Beatminerz, Lil' Fame (MOP) and others. "Keep Movin' On", the latest single, is a collaboration with Shara Worden (aka My Brightest Diamond who has collaborated with JMT before). The Video for that song is below.

Speaking of Vinnie Paz and DJ Muggs, Paz recently appeared on title track to the DJ Muggs Vs Ill Bill LP Kill Devil Hills (out NOW). The video for that track is below too...