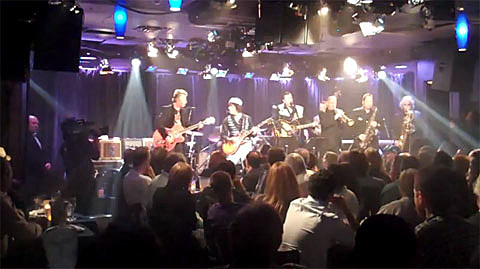 Last night's (and tonight's) show at Iridium Jazz Club was billed as "Jeff Beck invites you to a Very Special Evening - A Celebration of Les Paul with the Imelda May Band". The best way to describe it would be "The Imelda May Band played covers with the amazing Jeff Beck as their guitarist, a really awesome saxophone player and a couple of special guests". The show was being filmed by PBS for a special that is set to air around Christmas (and is being released on DVD).

Before the show started, they quickly filmed Jeff handing a plaque to Les Paul's son. The plaque will hang in the venue, which is where Les played every Monday night up until his recent death. Today, June 9th, would have been his 95th birthday.

The Irish Imelda May's band included her husband Darrel Higham who may have sang more songs than anyone all night, a drummer and an upright bassist. And there was a 3-piece horn section that included the crowd-pleasing Leo Green on sax. The setlist covered lots of standards ranging from Moon River to Rock Around the Clock. People clapped every time Jeff did a short solo in one of the songs. People made other weird crowd noises every time he switched guitars. Everyone was itching for him to jam out a little more. The NY Times says...

"Roughly speaking, Mr. Beck's long and passionate set was divided into three parts. The opening section, beginning with Elvis Presley's "Baby, Let's Play House" was pure rockabilly and allowed Mr. Beck to acknowledge some of the influences he absorbed after his initial exposure to Les Paul: Scotty Moore and Cliff Gallup in particular, but also with occasional Link Wray, Duane Eddy and Roy Buchanan flourishes thrown in. That part of the show also included a tune associated with Mr. Beck's own repertory, a reading of Johnny Burnette's "Train Kept A Rollin'" that was truer to the song's origins than the Yardbirds hit versions and other later recordings by Aerosmith and others.

After Imelda May took the stage, the show soon switched over to renditions of Les Paul's greatest hits, with Mr. Beck replicating some of the original solos, notoriously tricky, especially when not overdubbed, and transforming others by adopting a more stinging tone. In addition to "How High the Moon," he tackled "Vaya con Dios," "Mockingbird Hill," "Bye Bye Blues," "Tiger Rag" and, most challenging of all, "The World Is Waiting for the Sunrise."" [NY Times]

The first guest of the Gibson-sponsored night was Gary U.S. Bonds (whose credits include touring with the Beatles... as headliner). He sang one song with the band. It was his hit "New Orleans" and it was arguably the biggest highlight of the night. Jeff Beck introduced him by saying something like, "when I found out he was playing around the corner, I had to get him on this show." You can catch Gary TONIGHT (6/9) at BB King's (billed as "GARY U.S. BONDS - BIRTHDAY SHOW with Special Guests"). Happy Birthday Les. Happy Birthday Gary.

The second guest, who fit right in with the rockabilly theme Imelda May and band have going on, was Stray Cat Brian Setzer who performed "Twenty Flight Rock" with Jeff and band. He also then returned a couple of songs later to play guitar on "Shake Rattle & Roll".

The biggest guest of the evening, David Bowie, never left his seat in the audience (well, while the show was happening anyway).

They do it again tonight, with even bigger special guests rumored (member of the Rolling Stones among them). A video from last night below...