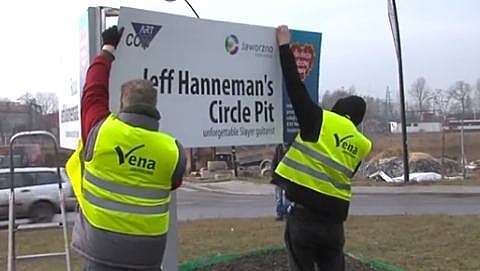 A mini uproar occurred across social media when the late Slayer heart and soul Jeff Hanneman was not included in this year's Grammys "In Memoriam" video  that was played during the awards ceremony and eulogized the likes of Lou Reed, Phil Everly and Cory Montieth of Glee. The snub was in spite of the fact that Slayer had been nominated for Grammys five times, winning twice, first for "Eyes of the Insane" in 2007 and again for "Final Six" in 2008, both of which were off pressings of Christ Illusion. While we can all take solace in the fact that the Grammys are often clueless and out of touch with reality, a city in Poland is doing Hanneman right: they named a traffic circle after him.

For one year, a traffic circle in Jaworzno, Poland, a city within a larger urban area home to 5.3 million, will be called "Jeff Hanneman's Circle Pit" ("Rondo Jeffa Hannemana" in Polish.)  A big "fuck yeah" from on high/down below, thanks should be directed to ART-COM Ltd., a company that won an auction to rename the roundabout. Hanneman, who passed last May due to cirrhosis of the liver, would have been 50 on January 31.

Watch a video (in Polish) of the circle's dedication below...