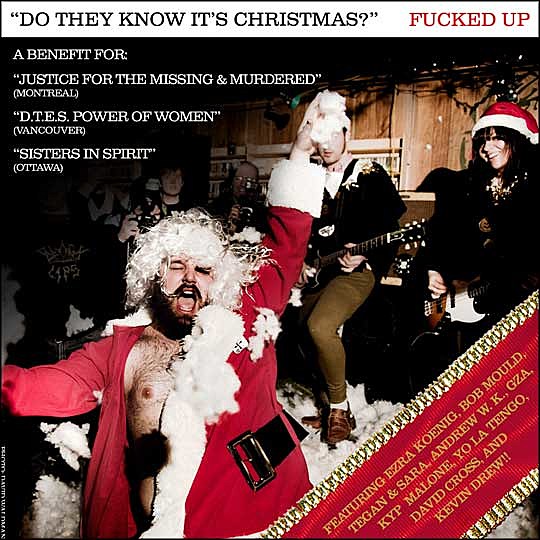 Matador announced that Fucked Up's 'Do They Know It's Christmas?' charity single "should be available" from iTunes today (December 8th) (still waiting it is). As previously reported, the song is packed with guests, including Yo La Tengo, GZA, Ezra Koenig (Vampire Weekend), Bob Mould (Husker Du), Tegan & Sara, Andrew W.K., Kyp Malone (TV on the Radio), David Cross and Kevin Drew (Broken Social Scene). In February, it'll be released as 7" single. The record is for charity, and you can read what Fucked Up singer Pink Eyes has to say about the causes, below. The band is also putting out a rarities compilation, Couple Tracks, in January and touring with Kurt Vile in Feb. (with 2 NYC area shows).

Another benefit record, Stroke: Songs for Chris Knox, is out today on Merge (in digital form, CDs come February 23rd). The proceeds go to New Zealand musician Chris Knox (Tall Dwarfs, Toy Love) who suffered a stroke last June. The two-disc collection is all covers of Knox's songs done by acts that include Yo La Tengo, Mountain Goats, Will Oldham, Stephin Merritt, Bill Callahan and...Jeff Mangum (doing "Sign The Dotted Line" by Tall Dwarfs). You can preview songs at Merge. The full track list below.

Don't forget, Bob Dylan's Christmas album is also for charity, benefiting Feeding America. His new video for "Little Drummer Boy" (animated and less jokey than "Must Be Santa") is below...

Fucked Up's frontman Damian Abraham, a.k.a. "Pink Eyes", says "it's hard to find a balance between the song being a fun, playful holiday classic and the reason we're putting it out, to benefit organizations dealing with a deadly, serious issue." Since 1980, there have been 520 known cases of missing or murdered Aboriginal women across Canada and many believe the true number to be significantly higher. If compared to the rest of the population their death and disappearance rate would be equivalent to over 18,000 Canadian women and girls missing or murdered. Approximately 50% of the murders and disappearances have occurred during or since 2000.

The three groups that will receive 100% of the proceeds from sales of this song are Justice for Missing and Murdered Indigenous Women (Montreal), DTES Power of Women Group (Vancouver) and Sisters in Spirit (Ottawa). - Matador

Bob Dylan - Must Be Santa