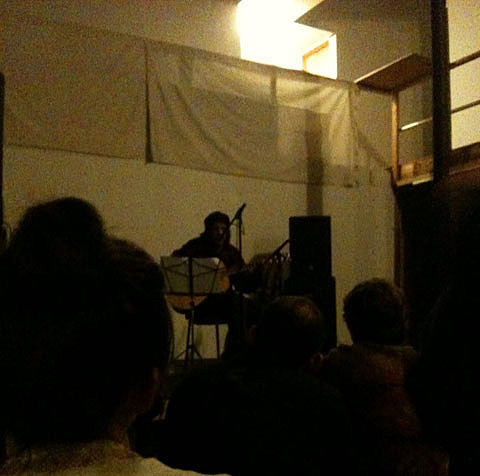 A magical show happened Saturday night at a loft in the Bushwick section of Brooklyn (at a space also known as The Schoolhouse when it throws shows).

Jeff Mangum, as he said at the show, is thinking of playing out again. He already played a rare 5-song set back in May at the Chris Knox benefit at Le Poisson Rouge (LPR), but he wanted to test out playing live a bit more so his friend set up this last minute show for about 75 lucky attendees, many who were invited just hours before it started, and who were sworn to secrecy and asked very strongly that no visual evidence of the show be posted anywhere afterwards. Like at LPR, there was supposed to be no pictures and no video, and like after LPR, audio evidence quickly appeared online. Word continues to spread.

Brooklyn electro-trio Forma live in, or are associated somehow with, the space, and they opened the show. Definitely check them out if you have a chance, like at TANDEM (246 Troutman Street, Brooklyn) on December 11.

Jeff, dressed in his signature red and black flannel, played 10 Neutral Milk Hotel songs on two different guitars and a microphone. He went on around 9:45pm, and was in top form, bringing many to tears as he opened with 'Oh Comely' followed by 'In the Aeroplane Over the Sea'. The acoustics in the spacious industrial-looking 3-story-high room were ideal for his powerful voice. He modestly thanked the crowd multiple times and asked for forgiveness for not being good with stage banter. Many were seated, with their jackets still on in the chilly room with a small stage and PA set up in it. Everyone was standing and warm though, and cheering, as the show ended and Jeff said thank you and good night after ending with 'Two Headed Boy Pt. 2'. Full setlist below...