I snuck this picture of the t-shirt... 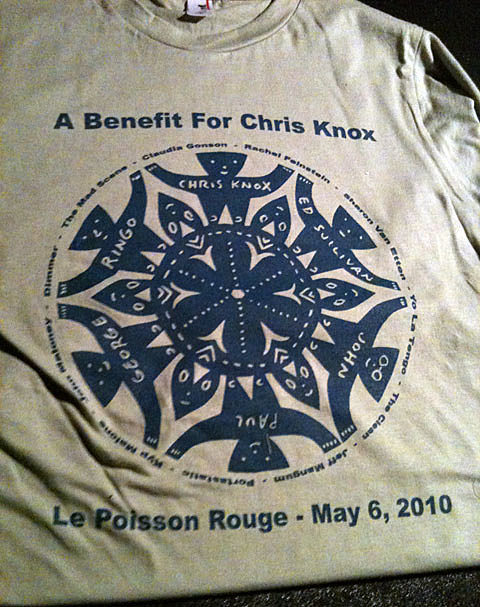 "Chris Knox (born September 2, 1952) is a New Zealand rock and roll musician, cartoonist, and DVD reviewer who emerged during the punk rock era with his bands The Enemy and Toy Love. After Toy Love disbanded in the early 1980s, he formed the group Tall Dwarfs with guitarist Alec Bathgate, much loved for their honest, unpolished sound and intense live shows. His 4-track machine was used to record most of the early Flying Nun singles." [Wiki]

Jeff Mangum played a set of Neutral Milk Hotel songs for the first time in nine years at the benefit for his friend, musician Chris Knox, last night, Thursday, May 6th. From opener "Oh Comely" to encore "Engine," and "A Baby For Pree," "Two Headed Boy Pt. Two" and "In The Aeroplane Over The Sea" in between, Mangum's voice was clear and strong as he sang from a chair into microphones set up a few feet away. Most of the audience looked somewhere between giddy excitement and shock. Some quietly sang along, others broke out into tears - one person choked on frantic, shallow breaths as "Oh Comely" climaxed, another stood with his hand over his gaping mouth, unable to move.

A few photos were furtively snapped in defiance of the posted signs, but most were content to just listen. Though "just listen" doesn't really describe the gasps, tears and unending applause. Mangum played with his eyes mostly closed, neck vein tensed, rocking and swooping to the contours of the songs. His eyelids fluttered open on the chorus of "A Baby for Pree" to reveal eyes rolled back into his head. Between songs Mangum gulped down water and was gracious, bordering on triumphant as he popped up at the end of "Aeroplane." He encouraged the crowd to contribute to the encore, "Engine." After the set, someone caught his attention with a book to sign, which he did. Most people up front looked anxious and ready for a post-show smoke.

It was fitting maybe that the bill for Mangum's last show, in 2001 in New Zealand, was with Chris Knox, who suffered a stroke in 2009. Though Jeff Mangum was a clear pinnacle, the rest of the benefit gig was an engaging, full evening which covered 12 bands and 2 comedians, and ran more than five and a half hours (though at least 1/3 of the venue cleared out after Mangum's 8:50pm set). The show ended at 1am, amazingly, exactly as scheduled.

Robert Scott (of the Clean) and TVOTR's Kyp Malone (aka Rain Machine) both played solo guitar sets. Kyp, who told the crowd they should check out the new Devendra Banhart video (he checked it out in a cafe because he doesn't have internet), was joined by Emilyn Brodsky for what he said was a Bob Marley cover. Rachel Feinstein did raunchy comedy.

After that, there was New Zealand band Dimmer (who are in town for a while), The Mad Scene (Hamish Kilgour of the Clean's other band), David Kilgour of The Clean (backed by Yo La Tengo and one other band member) and comedy from John Mulaney (who killed it) (and who you may have seen doing a bit about girl scout cookies on a recent episode of SNL).

"Portastatic" was Mac backed by Yo La Tengo. They closed with Superchunk's "Slack Motherfucker" complete with windmill guitar moves and pogoing from some of the crowd (even though the concert was going into its fifth hour at this point). Yo La Tengo, with extra member David Kilgour on guitar, covered a Chris Knox song, said many kind words about Chris and closed with two songs from their 1993 album Painful, which Chris Knox contributed art work to.

The Clean, who Ira introduced as the greatest band in the world, and who'd already been up several times as their solo bands, closed the night right, both jangly and poppy. And despite the mass exodus after Jeff, a respectable amount of people were still there right until the last song. Catch the Clean again (if you have a ticket because it's sold out) at The Bell House tonight (5/7).

Editor's note: Ben Goldberg did an amazing job organizing the event, keeping scalpers away, and making sure that pretty much every person in that venue (except maybe the bartenders) paid their $75 donation to Chris Knox to get in the door (or $20 if you showed up after Jeff went off). Ben did less of an amazing job during his pre-Yo La Tengo stand up routine, but nobody's perfect!

Illegally shot (not by us!) audio and video from the event, and the new Devendra Banhart video, and Jeff Mangum's setlist again, below... 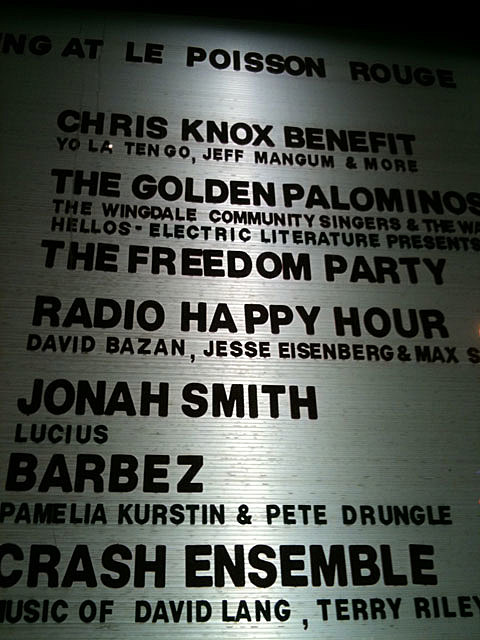 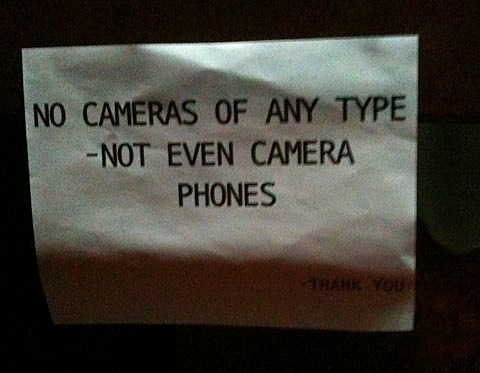 and on Kyp Malone's recommendation...