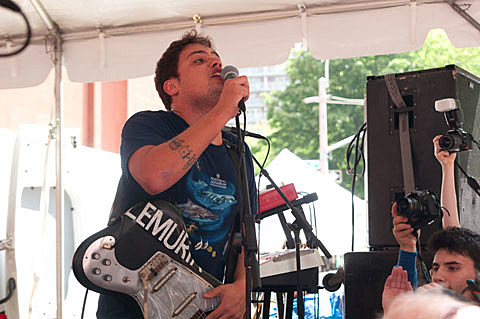 Jeff Rosenstock, formerly frontman of the recently-broken up Bomb the Music Industry and the been-broken up Arrogant Sons of Bitches, currently a solo artist and one half of Antarctigo Vespucci with Chris Farren of Fake Problems, has given us a list of his favorite albums of 2014. It includes Chumped, whose LP release show in Brooklyn he plays on 12/13, as well as Hard Girls, who he joined at their BV-presented NYC debut (Chumped played that one too). It's a cool list all around. Check it out, including commentary, below.

In addition to his full-band set the Chumped release show (which also includes Cayetana, Chris Gethard and Adult Dude), Jeff plays full-band in Ithaca with Perfect Pussy this Saturday (12/6) and solo in Providence later in the month. His full tour schedule, with his year-end list, below...

Jeff Rosenstock's Favorite Albums of 2014
Hey, you know what? A lot of really good records came out this year. It was kind of astounding. Here's some of my favorites by both friends and total strangers. These are some of the ones I heard and really liked.

ALVVAYS - ALVVAYS: This has to be my favorite record of the year. It's one of those records that I've listened to so much that I've had to start taking days off from it, but even on those days the melodies of "Ones Who Love You", "Archie Marry Me", "Party Police" and also, you know what, EVERY song on this record gets stuck in my head. And it makes me feel FEELINGS. As solid as a debut can be, I hope this band makes a lot more music.

HARD GIRLS - A THOUSAND SURFACES: Caveat, Hard Girls have been close friends since before there was a Hard Girls. Once Hard Girls started, they were quickly one of my favorite bands and I released two of their records. That said, I remember sitting in my living room listening to an unmastered CD of "A Thousand Surfaces" and having my mind so blown. This record is a huge step forward from a band that was already at the top of their game, and I can't even imagine what the next step is going to sound like.

PARQUET COURTS - SUNBATHING ANIMAL: Like many great post-punk bands Parquet Courts have found a way to equally value both energy and expanse. On "Sunbathing Animal" Parquet Courts takes immediately classic sounding songs and plays them with the gleeful freedom and occasional recklessness of a DIY house show.

ANDREW JACKSON JIHAD - CHRISTMAS ISLAND: Like Hard Girls, this is another band that manages to keep growing musically and lyrically, making every record their best yet. The acoustic instrumentation is fuzzed out to perfection, and the melodies and lyrics can stop you dead in your tracks. Anyone who has listened to AJJ for years is likely not at all surprised by this, but I think it's about time everyone else starts taking note that this is one of the best bands of our generation.

* TONY MOLINA - DISSED AND DISMISSED: This record I guess doesn't count because it's a reissue. But how am I not going to mention it? Perfect pop songs, completely blown out with awesome guitar solos. The longest song is 1:32 and has the most headbanging breakdown of the last two years. 12 songs under 12 minutes. Honestly, fuck everything else but this record.

STEPHEN MALKMUS AND THE JICKS - WIG OUT AT JAGBAGS: This year, I have had many drunk conversations with fellow Pavement fans that are all "man... his new stuff might be as good as Pavement? Is it better than Pavement?" At the end of the day, I mean, who cares right? But it's cool to see that Malkmus is still putting out creative and relevant music that is also challenging and fun. MVP award goes to Jake Morris for filling the enormous shoes of mega-drummer Janet Weiss without missing a beat get it get it get it?

JOYCE MANOR - NEVER HUNGOVER AGAIN: This is an endlessly listenable pop-punk (sorry guys) record in an era where most pop-punk is endlessly unlistenable. Great lyrics, catchy melodies, interesting songs, huge production without all that AutoTune quantizing bullshit, no filler, super quick, in and out. Duh.

TUNE-YARDS - NIKKI NACK: The first time I heard tUnE-yArDs it was like a revelation. Not only is Merrill Garbus an incredibly talented multi-instrumentalist who uses loop pedals to create dense textures, but the songs are so good that all that skill is an afterthought. So it's no surprise that "nikki nack", which seems to rely less heavily on looping trickery and amps up the percussive and rhythmic elements, is another totally unique and amazing album from tUnE-yArDs, one that teeters the line between pop-genius and avant-garde more than any other release this year.

CHEAP GIRLS - FAMOUS GRAVES: Cheap Girls have been making jangly rock-and-roll that would perfectly suit a mixtape in the mid-90's since before that was a cool thing to do. "Famous Graves" is possibly the best distillation of their music so far. Once again, just another great record from a band who has a history of making great records. Sometimes it's that simple.

CYMBALS EAT GUITARS - LOSE: This one kind of caught me by surprise. I've heard a lot about this band but hadn't heard them until this release. The songs on this record take their time traveling trough peaks and valleys and always pick the perfect time to freak out ("Place Names" seems to build continuously for five minutes and twenty seconds before its jarring noise/guitar coda pulls everything wildly out-of-focus) or tighten up ("Lifenet" is a contender for best accidental pop song of the year.)

RUN THE JEWELS - RUN THE JEWELS 2: In an era where hip-hop has drifted towards overly minimal production and away from rapping it is refreshing to hear El-P and Killer Mike make records that are bringing the energy of Public Enemy and EPMD to a new generation of hip-hop fans for them to blast far into the fucking future.

* CHUMPED - TEENAGE RETIREMENT: What's the date cutoff for a list like this? Does "Teenage Retirement" miss it? Regardless, I vote for Chumped to be the band that takes 2015 by storm. Their much-anticipated debut full-length strikes the perfect balance all the things I've always liked about indie rock and pop-punk. Hella sing-alongs? Yup. Double time skate punk? Hell yeah. Subtle moments that explode into rock anthems? Yes! Yes! This record rules.