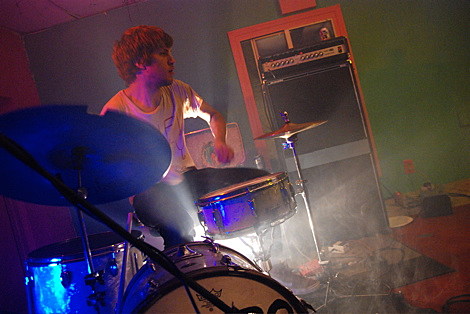 JEFF the Brotherhood are back in town! If you missed them the last two times they were in town, well, you've got three more chances this week: tonight (7/15) at Death by Audio, Thursday (7/16) at Cake Shop and a secret show on Friday (7/17) that will be announced day of show via their Twitter. Seriously, Jake and Jamin put on one of the rockin-est, most fun shows I've seen this year. The boys are putting the final touches on their new album, Heavy Days, which comes out October 6 via their own Infinity Cat label. They've also got a new 7" single, "Heavy Damage," that they should still have copies of at shows, but you can download the a-side at the top of this post. They'll also be touring with the legendary Shonen Knife this fall.

Tonight's show at Death by Audio should be deafening. JEFF shares the bill with noise-pop duo Sisters, who I've written about more than once already, and have become big fans of. Third on the bill are Sisters' Death By Audio Records label-mates Coin Under Tongue who make the kind of stoner, punk-inflected hard rock that Sub Pop used to specialize in, in the label's early days. (I'm talking Tad, Mudhoney, Das Damen). There's other influences in there too -- metal plays a big part, as does UK punk and postpunk I suspect. And there are some really nice guitar parts when the guys aren't stomping on the pedals but basically you're getting balls-to-the-wall, scream-the-chorus rock. It goes without saying Coin Under Tongue are really, really loud. But they've got songs to match the volume. They're finishing work on their new album, but have offered up a progress report of an EP that you can download at the top of this post. It rocks. 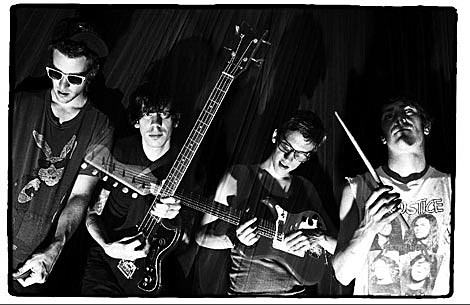 Thursday night's show at Cake Shop (JEFF plays first, like 8:30) is also a good lineup, with the kickoff show of Brit band Lovvers' American tour. Try not to hold that double V against them, these guys are good, and play sloppy, catchy garage punk. You see Wipers and Germs comparisons thrown around a lot, but I was more encouraged to check them out when they listed '60s-loving '80s UK act The Baracudas as an influence on their MySpace. There's an EP out now -- you can download it's lead track "Human Hair" at the top of this post -- and their debut album OCD Go Go Go Girls is due out in October.

Also on the bill are Darlings who, now that I've seen them play and heard their album, I don't think sound anything like Teenage Fanclub or Sloan (so said L Magazine). To me, it's more '90s slacker indie rock -- Pavement, Sebadoh (which The L cited too), or even Small Factory. Comparisons or no, Darlings' debut, Yeah I Know, is chock-a-block with stick-in-your-head songs, two of which you can download at the top of this post.

Rounding out the Cake Shop line up is Stupid Party and Ex-Humans. 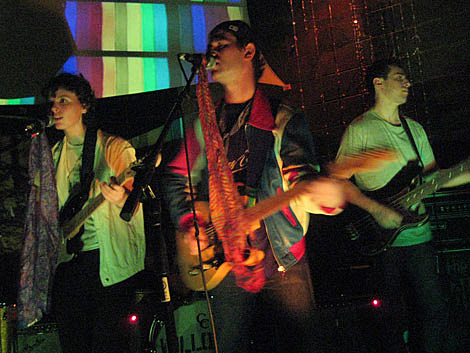 Savoir Adore have been written about more than a few times this year and am a big fan. Sometimes anthemic, sometimes danceable, singer-guitarists Deidre Muro and Paul Hammer write hopeful, melodic, pristine pop and their isn't a dud among the 14 tracks on their debut album, In the Wooded Forrest, which is out this week digitally and has been in constant rotation on my stereo this week. They're even better live if you ask me, giving maybe the best performance I saw during the Northside Fest. You can see them live and pick up the album at their record release party Friday night at Cameo Gallery (7/17). The $10 entry gets you a copy of the CD which is a pretty good deal. You can get three of the album's songs for free via their Machines EP which is linked to at the top of this post.

Making it an even better deal is that the show also features Acrylics who were easily the best Northside Fest performance by a band I hadn't seen before. Like Savoir Adore, Acrylics make '80s-tinged guitar pop with boy-girl harmonies and big hooks. You can download their song "Molly's Vertigo" at the top of this post. 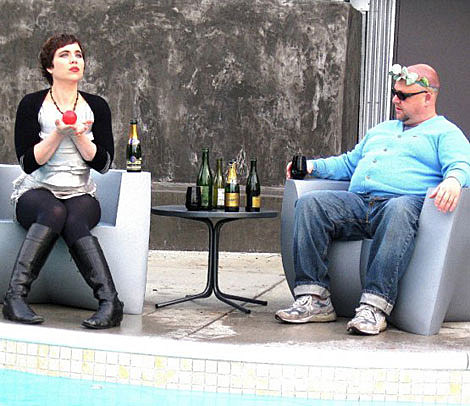 You can also catch Acrylics with fellow Cantora artists Francis and the Lights at Music Hall of Williamsburg for the official Siren Fest afterparty. This year's Siren is the best line-up they've had in ages... maybe ever. Built to Spill, Thee Oh Sees, Micachu, Japandroids, A Place to Bury Strangers, Monotonix, Future of the Left, Frightened Rabbit -- it's pretty much good band after good band. The worst thing about it is having to make a choice between bands, or trying to run between stages and miss half a bands set in the process. I would like to call out Grand Duchy which is Frank Black and his wife Violet Clark. If you haven't heard their album, Petit Fours, it's really good and not quite like anything like Frank Black has been involved with before. You can also catch Grand Duchy on Friday at Maxwell's.

Saturday's weather report isn't so hot right now -- they're calling for thunderstorms -- but we can hope they're wrong.

Also this weekend are a couple shows featuring bands who'll soon play Merge Records' 2oth Anniversary spectacular, XX Merge. This Friday's (7/17) edition of the Seaport Music Festival is Superchunk and Versus. Superchunk's influence on indie rock over the last 15 years cannot be overestimated (and I'm not even considering that Mac and Laura started the label) while Versus were one of the '90s more under-appreciated groups who are currently recording their first new album in nine years!

And then Sunday, The Clientele are playing Music Hall of Williamsburg -- and you can check out "I Wonder Who We Are," the first released track from their new album, Bonfires on the Heath, at the top of this post.

That's it for this week. Videos, flyers and tour dates are after the jump... 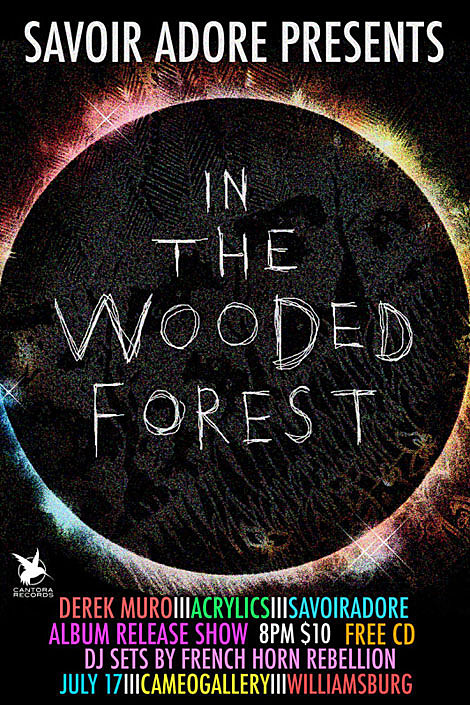