JEFF The Brotherhood at Stubb's (more by Tim Griffin) 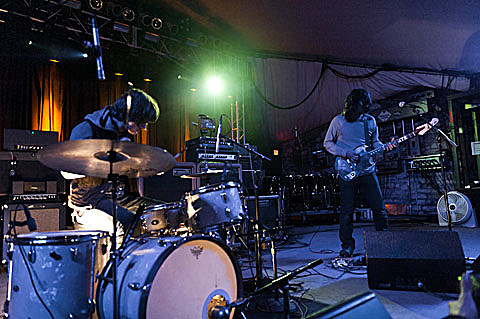 Jeff The Brotherhood are currently on the road with The Kills and Hunters. Check out pictures from both Wednesday's Austin show and last week's Chicago date. The tour hits a now-sold-out Terminal 5 in NYC on 2/11.

Don't have tickets to Terminal 5? Rather see JEFF the Brotherhood somewhere smaller? The band also have a pair of other NYC-area dates, both with Uncle Bad Touch. In addition to the previously discussed Maxwell's on February 9th (with Devin), JEFF & UBT will play Death By Audio on February 8th (with The Numerators). Advanced tickets for Death By Audio go on sale at noon, while tickets for Maxwell's are still on sale now.

Uncle Bad Touch welcomed their self-titled LP late last year via Infinity Cat. Check out a video for "I Wanna Love You" from that LP, as well as all tour dates below.