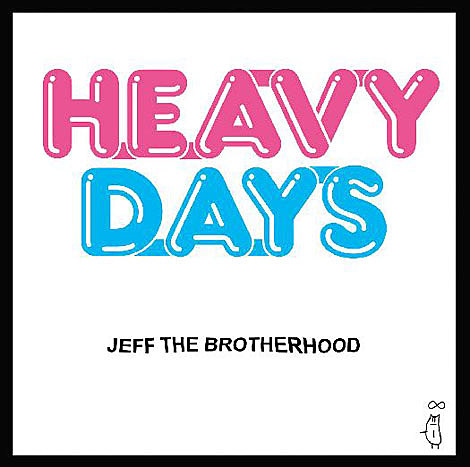 JEFF the Brotherhood has quite a few tour dates lineup up already for 2010. The band is touring with Psychedelic Horseshit in January, Screaming Females in February, and Ty Segall after SXSW (which they'll be playing) in March. In between, they have some shorter trips that include shows Upstate and around the North East.

As previously mentioned, JEFF comes to NYC with Screaming Females for the first date of their tour on February 6th at Bowery Ballroom. Also on the bill are forgetters, Shellshag, The Measure (SA), Black Wine and Groucho Marxists. Tickets are still on sale.

JEFF just put out a CD version of Heavy Days, previously LP and download-only, on their Inifity Cat label (it adds bonus track "Pleasure Centre"). There's also a new video for their slow-jam "The Tropics," which we're premiering below. Filmed while on tour, the video takes the song's opening lament of "Do you really want to hurt me" to heart with some kitchen wrestling and angsty slow-mo party footage. That video, with a repost of the psychedelic "U Got the Look" vid and all tour dates, below...

U Got the Look

Filed Under: Jeff the Brotherhood
Categories: video
Comments
Leave A Comment
Back To Top
RELIVE IT: The 2019 Coney Island Mermaid Parade in pics
Joey Bada$$ shares new single “Let It Breathe” for his birthday
Pitchfork Fest reportedly looking at September for this year
Watch New Radicals play “You Get What You Give” for Inauguration Parade
17 New Songs Out Today
27 punk drummers cover “We Are The World” for Inauguration Day
Tomahawk prep first album in 8 years, Ipecac posts new teaser video