Jeff Tweedy and his son Spencer 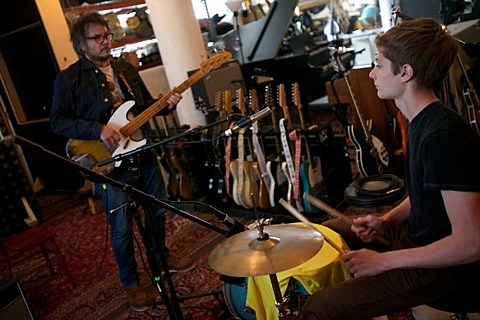 Happy Father's Day to all the fathers out there (and make sure to call your dad!). In recent dad news, Wilco frontman Jeff Tweedy has teamed up with his 18-year old son Spencer to release an album under the name Tweedy. The album, called Sukierae, comes out September 16 via Wilco's dBpm label. The band recently debuted twelve new songs at New York's Mountain Jam festival, and thanks to NYC Taper, you can listen to the full set (which also includes some Wilco and Uncle Tupelo songs) below. Also below is a video from the band's live debut in Detroit, and a stream of the studio version of "I'll Sing It" which features guest vocals from Jess Wolfe and Holly Laessig of Lucius.

One of the songs played at Mountain Jam was "Summer Noon," a track Jeff is contributing to the soundtrack of the new Richard Linklater film, Boyhood. Also on that soundtrack is Arcade Fire, Flaming Lips, Vampire Weekend, The Hives, Cat Power, Yo La Tengo, Bob Dylan, Paul McCartney, and more. Tracklist below.

Tweedy have more tour dates coming up, including Taste of Chicago and Newport Folk Festival. All dates are listed, with those streams and video, below...