Paul Kantner at The Paramount in 2014 (photo by Greg Cristman) 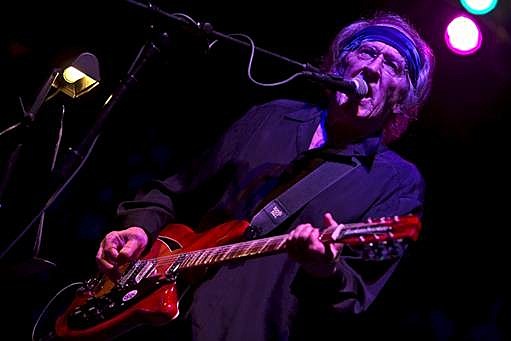 Paul Kantner, one of the giants of the San Francisco music scene, died Thursday, Jan. 28, of multiple organ failure. Mr. Kantner, founding member of the Jefferson Airplane, was 74 and had suffered a heart attack earlier this week. His death was confirmed by longtime publicist and friend, Cynthia Bowman, who said he died of multiple organ failure and septic shock. Mr. Kantner suffered from a string of health problems in recent years, including a heart attack in March 2015. [SF Gate]

Jefferson Airplane guitarist/singer and San Francisco scene legend Paul Kantner has sadly passed away today at age 74. He was a founding member of the Airplane and was with the band until the end (including their 1989 reunion) and wrote or co-wrote some of their best songs, including "Today," "The Ballad of You and Me and Pooneil," "Martha," "Won't You Try/Saturday Afternoon," "Crown of Creation," "We Can Be Together," "Volunteers" and plenty more. He was a pioneer of American psychedelic rock as we know it, and gave legendary performances at both the Monterey Festival and the original Woodstock.

He also led spinoff band Jefferson Starship from 1974 to 1984, and then from 1992 up until his death, and put out various offshoot records, including the great sci-fi concept album Blows Against the Empire, Sunfighter, and Baron von Tollbooth and the Chrome Nun (all three with Grace Slick and several other musicians from their scene like Jerry Garcia and David Crosby). He also appeared on various other records from that era, like Grateful Dead drummer Mickey Hart's Rolling Thunder, David Crosby's If I Could Only Remember My Name, Papa John Creach's self-titled solo album, and more.

Just last year, Paul Kantner and his latest version of Jefferson Starship were celebrating Jefferson Airplane's 50th anniversary by playing full Airplane sets on tour (including a few in NYC). They were scheduled to keep touring this year, including a return to NYC on March 20 at BB King's, though we can assume that tour is off. Jefferson Airplane are also set to receive a lifetime achievement award at the Grammys this year.

Rest in peace, Paul. You'll be missed but not forgotten.

Check out our list of 15 essential Paul Kantner songs. Listen to even more of his material, and read tributes by Jefferson Airplane's Marty Balin and Jorma Kaukonen, and David Crosby, below...

PAUL"So many memories rushing through my mind now. So many moments that he and I opened new worlds. He was the first...

Jorma Kaukonen says, "We knew yesterday that Paul had suffered a grievous heart attack and probably wasn't going to make it. We all hoped for better news, but it just wasn't to be.

Paul and I were old friends. Bob Kinzie introduced me to him when I was in Santa Clara in '62. Our commonality was always the music and whatever it took to make it happen. We all played the same little dusty, smoky rooms... struggled to be heard over the hiss of espresso machines... and loved every moment of it. When Paul enticed me into joining what would become Jefferson Airplane, we rehearsed relentlessly. When we went on the road in the beginning we couch surfed together. No one could afford hotels. We shared food... we shared cars... we had one heart." Read more here.