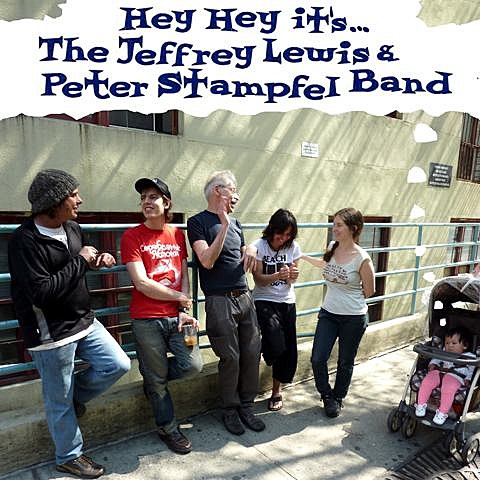 The Jeffrey Lewis and Peter Stampfel Band have been playing NYC a lot lately, and they've got two more shows happening this month, which are CD release shows for their new album, Hey It's...The Jeffrey Lewis & Peter Stampfel Band which is out May 15. The first happens in Brooklyn on May 16 at Shea Stadium with The Everymen, The Brooklyn What, and Shellshag; and the second one happens the next day at The Bowery Electric (5/17) with Crazy & the Brains and Berth Control. Tickets for the Shea show are on sale now and admission for the Bowery Electric show is $8 at the door.

You can also catch Shellshag in NYC at one of their many upcoming shows. Those shows include Death by Audio this Friday (5/10) with Black Wine, Swearin', and comedians Dave Hill and Chris Gethard (who hosts the BV-curated Red Bull Sound Select show); May 18 at Mercury Lounge with JEFF the Brotherhood and Hunters (sold out); May 25 at Party Expo with Moira Scara; and Death by Audio on June 5 with Shell's brother's band Apogee Sound Club.

After their release shows, The Jeffrey Lewis & Peter Stampfel Band will head over to Europe for a number of shows, including one in London performing as Daniel Johnston's backing band. All dates are listed, along with a video from one of their recent Mercury Lounge shows, below...

* - w/ The Everymen, The Brooklyn What, Shellshag
^ - w/ Crazy & the Brains, Berth Control