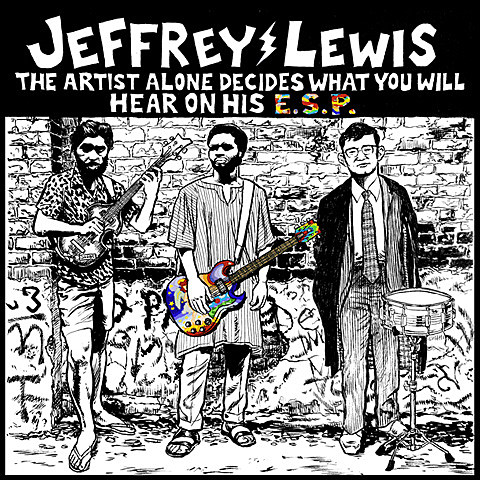 Jeffrey Lewis' terrific second album, It's the Ones Who've Cracked That the Light Shines Through, contains more than a few of his classics, like "Don't Let the Record Label Take You Out to Lunch" and "I Saw a Hippie on 8th Avenue." (You can stream it in full below.) It was released in 2003 on Rough Trade but is getting its first-ever vinyl release this year via Don Giovanni and will come with a bonus CD of 12 non-album tracks from the 2002-early 2004 era. That's the cover art to the bonus CD, above, and look for that later in 2015. He's also got a new issue of his comic, Fuff, which you can check out here.

In the more immediate future, Jeffrey Lewis will be playing live. A lot. On Saturday (1/10) at People's Voice Cafe, he'll be playing solo as part of a "Lewis Family" show with short sets from Jordan Carlos, Professor Louie, Josh Sol Lewis, Shayna Lewis and "more family folks." Then Jeffrey Lewis & the Jrams will play January 20 at Rough Trade with Seth Faergolzia and more TBA. It's his only full band show of the season and tickets go on sale today (1/7) at noon.

Then on January 30 at Jalopy in Red Hook, he and frequent collaborator Peter Stampfel will be reading through some new material as a duo. Additionally this month, Jeffrey will be taking part in a Lou Reed tribute happening at The Gutter on January 17 with Peter Stampfel, Sharkmuffin, The Brooklyn What and more.

In February, Jeffrey will be touring with Diane Cluck (who put out the excellent Boneset last year). That tour kicks off here in NYC at Nola Darling on 2/6 with The Spookfish also on the bill. Tickets for that show are on sale now.

You can also see Jeffrey Lewis at the 2015 Brooklyn Folk Festival, which goes down April 17 - 19 at St. Ann's Church. Lineup and ticket info are still to be announced.

All Jeffrey Lewis tour dates are listed, along with the album stream, below...