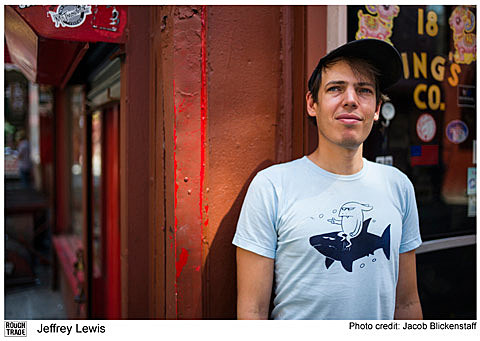 Jeffrey Lewis will release his new album, titled Manhattan, on October 30 via Rough Trade. It's his seventh album for the label and his first since 2011's A Turn In The Dream-Songs. (He did make a collaborative album with Peter Stampfel in 2013.) In addition to his band Los Bolts -- drummer Heather Wagner and bassist Caitlin Gray -- the record also features contributions from The Wave Pictures, Turner Cody, and David Beauchamp. The first released track from the album is "Outta Town," a love song from Lewis' unique, thoughtful perspective. Says Lewis:

Listen to "Outta Town" below.

As usual, Jeffrey Lewis is playing lots of shows. He's currently in East Asia, and will be touring Europe, followed by a UK/Ireland tour with the Peter Stampfel Band, before returning to the U.S. He'll play NYC's Sidewalk Cafe on September 27 which is the annual Kupferberg Birthday Memorial Tribute Brunch (noon - 3 PM) featuring "a set of Tuli songs and poems performed by Jeffrey Lewis & The Deposit Returners, plus other performers and readers and speakers, and cake, etc! Free entry!"

Then on October 27 at Le Poisson Rouge it's the Manhattan record release party. It will also be the opening for a visual art show in the LPR's gallery, featuring a career-ranging selection of Lewis's illustrations and artworks, followed by a live band performance. More info, including when tickets go on sale, will be announced soon.

He's got other area shows, including New Brunswick on October 2 (venue TBA) with Joe Jack Talcum (Dead Milkmen), Teenage Halloween, The Uncommonly Good, and Friends in Distraction, and a show at BSP Kingston on October 18 with Diane Cluck. All tour dates are listed, along with Manhattan tracklist/artwork and new song stream, below... 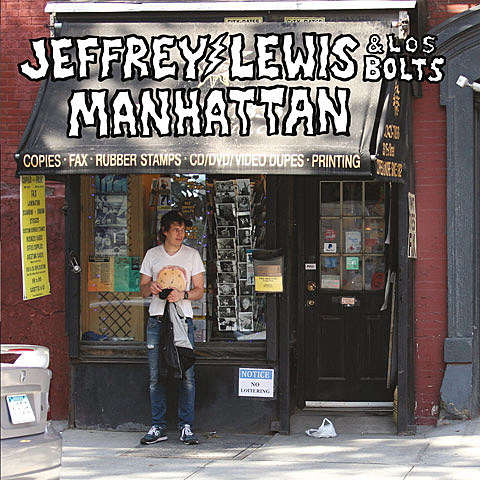