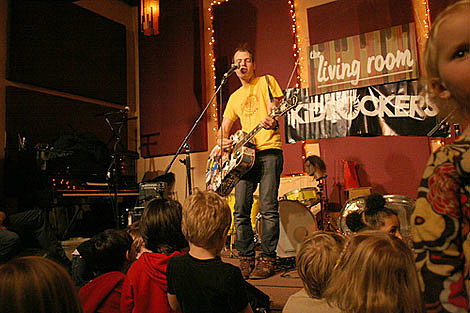 New York's Jeffrey Lewis has been busy in the last year. (To see exactly how busy, check out Jeff's "A Year in Love and Music" entry on the NYT's Measure for Measure blog, to which he's been contributing.)

Jeff's four-date tour with Dufus finishes this Saturday, March 14th in Brooklyn at Pete's Candy Store with a CD release show for Dufus's new record, In Monstrous Attitude (samples at link). In May/April, Dufus will head out on a European tour (dates below). The Dufus album features comic art by Jeffrey Lewis, who is releasing his own new album (as full-band Jeffrey Lewis & The Junkyard) 'Em Are I on April 20th (UK/Europe) and May 19th (US), both on Rough Trade Records.

Jeffrey recently put his drawing talents to use (as he does in his comics and elsewhere) in a new video for the song "To Be Objectified" (which appears on the upcoming album). The video was created with Jack Ferry and $99 Music Videos - a site that challenges musicians to make a video for that sum with a set of bare-bones criteria. Watch it, and the making of it, below.

Jeff will tour Europe March-May with a solo/full-band tour that eventually reaches New York's Bowery Ballroom on Wednesday, May 20th (tix on sale now) - a venue featured prominently in Lewis's "Williamsburg Will Oldham Horror," video below.

Next Thursday (3/19), Jeff will give a lecture on Watchmen (the topic of his college thesis) at midtown comic spot Jim Hanley's Universe. "It should be stressed that it's for people who have read the book, not for people interested in it looking for some kind of introduction... he'll be revealing too many spoilers!." Jeff gave a similar lecture in Portland, OR, and London earlier this year.

All tour dates, Jeff's "A Quick Biography of Barack Obama," and the above-mentioned videos, below...

Jeffrey Lewis & and the Junkyard - "To Be Objectified"

Jeffrey Lewis & and the Junkyard - "To Be Objectified" making-of

A Quick Biography of Barack Obama by Jeffrey Lewis