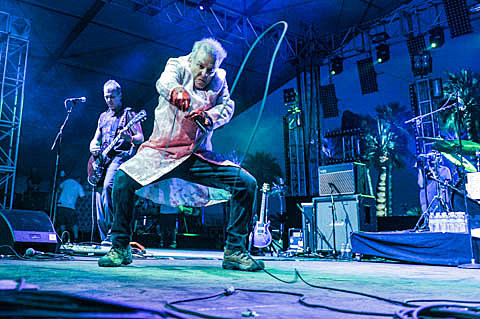 Former Dead Kennedy Jello Biafra and his current band The Guantanamo School of Medicine will be heading out on a North American tour this year with Detroit hardcore vets Negative Approach, whose current lineup has been active longer than the band's initial run in the '80s. That tour hits NYC on June 27 at Highline Ballroom. Tickets for that show are on sale now. All dates are listed below.

Jello also just participated in Fuse's "Cratediggers" video series where musicians talk about -- and show off -- their record collections. As you might expect, he's got a lot of vinyl but some of the things he really digs might surprise you. (He's also still mad at Tipper Gore.) It's nearly 30 minutes over two parts, but the videos are funny, insightful and inspiring. Watch it below.

Meanwhile, the current incarnation of the Dead Kennedys (East Bay Ray, D.H. Peligro, Klaus Flouride and Ron "Skip" Greer) are also touring this June and hitting NYC on June 19 at Irving Plaza. Tickets for that show go on sale Friday (4/25) at noon. All of their dates are listed below too.