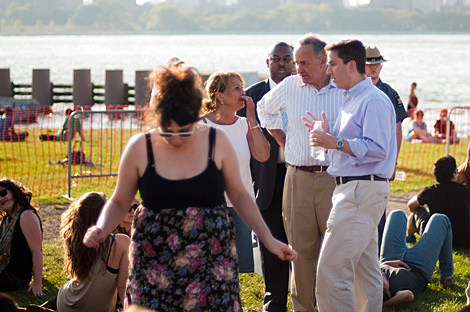 JELLY's Pool Parties are a business - not a charity, but they have consistently provided great free concerts that support artists while doubling as a great place to hang out on Sundays during the summer. With that in mind, check out the press release they sent out below...

JELLY, the biggest summer event series to hit New York in decades, is in danger of being shut down. The Pool Parties were originally held at McCarren Park Pool and were moved to the East River State Park in 2009. The free concert series started as a regional event but expanded to global recognition in a short period of time. By summer 2009, audiences were traveling far and wide to experience the Pool Parties first hand.

The future of the Pool Parties at the East River State Park could be in jeopardy. After a very successful 2009 season with 8 weeks of free performances including Grizzly Bear, Girl Talk, The Black Lips, Dirty Projectors, Deerhunter, Dan Deacon, No Age, Mission of Burma, Beach House, and Simian Mobile Disco, news came from the New York State Parks Department and the Open Space Alliance that the East River State Park may not be available to JELLY for the 2010 season. This will ultimately put an end to the flourishing free summer series.

U.S. Senator Charles Schumer, a Brooklyn native, is now leading the fight to save the JELLY Pool Parties. The Senator took the stage at the last Pool Party in August 2009 and pledged that the free concert series would return to the waterfront in 2010. Senator Schumer and his staff have been campaigning for the Pool Parties to remain at the East River State Park, speaking to other state and city officials to ensure JELLY's free summer series will be back for a 5th year.

The fight is ongoing and the cause is now in need of public action. JELLY is reaching out to the community to call Senator Charles Schumer at (212) 486-4430, or via email phil@schumer.senate.gov to show their support and express any concerns on behalf of this tremendous free community program. The Senator will relay the public opinion to the NYS Parks Department and the Open Space Alliance.