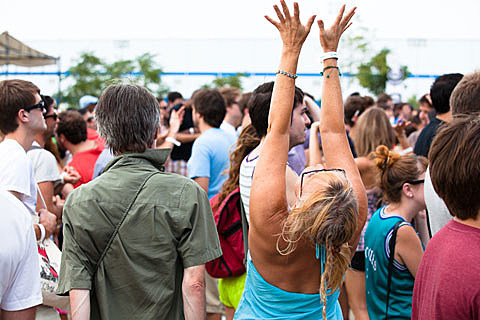 Jelly has responded to OSA's cancellation of the final Pool Party and accompanying press release. Read Jelly's response in full, below...

JELLY is a small Brooklyn based company consisting of four people whom with the help of our extended family of staff, volunteers and friends, have now put on five years of free Pool Parties in Williamsburg, Brooklyn. As most are aware, the lawyer for The Open Space Alliance released a statement last night stating that they have decided to cancel our last show for the 2010 season. We would like to take this time to state some facts, and express our true sadness and shock with this decision.

To date, Jelly has made every single contracted payment to The Open Space Alliance in full as outlined in our contract for the 2010 season. Pursuant to our contract all payments were scheduled and to be made in full prior our first show on July 11th. All payments were paid promptly and on time per the contractual terms, save for our final payment that we intentionally delayed. The reasoning for this delay was due to a significant sponsor conflict that had arisen between The Open Space Alliance and JELLY. Our desire was to resolve this issue before we made our last payment. Despite our many attempts to convey to OSA what we believed were well documented maneuvers that fell out of line with our contract, in good faith, JELLY went ahead and fulfilled our final contracted payment hoping as always, that overlooking would lead to a better working relationship.

The 'delinquent payments' currently in question, and the stated reasoning behind OSA's cancellation of our final show of the season, refers to 'fees' that were not defined in our contract, and in addition had no contracted payment schedule of any kind. These fees include beverage-sampling fees, origination fees for filming, additional security above what was contracted, extra stagehands, an additional generator for sponsor activations, and barricade to be used to segregate the state park on our show days. Pursuant to the terms of the contract, JELLY was to be held responsible for any additional production fees that were incurred by OSA for Pool Party dates, but again, no mention of payment terms, or schedules of any kind. Some of the fees made sense to us due to the scope of our shows. Other fees, however, seemed arbitrary and we simply desired to come to a reasonable conclusion. It is important to mention that OSA laid out the first additional fees, which were significant to say the very least, less than 48 hours before our first show on July 11th. It is also important to mention that we have been consistently met with additional production costs/fees throughout the summer.

JELLY has been making weekly payments to OSA throughout the summer for overages not included in our initial contract, and that we did not dispute. Over the course of the last few weeks, we have been in extensive conversations with OSA to understand the nature of certain 'new' costs so that we would feel comfortable paying them, and complete our summer series. Yesterday afternoon, we outlined a payment plan that we sent to OSA for all "new" fees that were deemed appropriate reaching upwards of $31,000+ to be paid in two installments, half before we walked onsite for the show this week, August 22nd and the other half to be paid before we walked onsite for the last show on August 29th and clearly stated that as for the rest of the fees (which by comparison were nominal), we were more than willing to discuss in a rational manner, but needed for OSA to at least see/hear our point of view instead of merely shutting us down without discussion.

This plan was met with a simple response stating that OSA did not accept the offer and were canceling our last show with no further talks, even though again, per our contract there are no parameters for the extra fees and absolutely no mention of a date by which they were to be paid.

Understandably, having already sold the sponsorships for the summer and made a fixed budget (even with some allowances for excess fees), we found the demands for payment of "overages" before each show with no allusion that this would be the case before the summer started, a bit hard to swallow. Especially being that at the end of the day, The Pool Parties have never made us money, they are a labor of love that we gladly do each year because they make both us and the community happy...not to mention we get to see some of our favorite artists in our own backyard, for free.

We are saddened that we were not given the contractual 24-hour notice of the final cancellation so that we could prepare our partners and bands that have supported this series and were booked for this date. Instead, we were met with calls last night from press entities asking for statements on a press release issued by OSA lawyer and board member Adam Perlmutter only hours after The Open Space Alliance rejected our offer for the non-contractually laid out extraneous fees brought up throughout the course of this summer.

We truly believed this was something that could be worked out, and hopefully still can, as we again, had paid all contractual fees in full before the first date even began. In fact, since there was no payment timeline for these extra fees in the contract, we even thought that having all seemingly fair fees paid by the last show was reasonable on our end, especially considering the only remaining fees in question totaled a relatively insignificant number in the grand scheme of things. We are deeply saddened that the series we built has become such a burden on our office even after we have fulfilled contractual obligations. We've been shocked to find how badly we are looked upon by OSA/State when every other venue and/or client we've worked with has had nothing but positive things to say about our work ethic and attitude.

In conclusion, for four years, JELLY has paid every band that has ever played the Pool Parties. In our fifth year, we have made all contractual payments to The Open Space Alliance for this summer's shows, made deposits for every band that requested them and have paid the rest of the band's fees in full day of show. We have tried to work out fees that seemed appropriate with The Open Space Alliance and were actively working towards what we hoped was a fitting compromise on ones we deemed arbitrary and unfair.

We regret that we are not being allowed for the reasons outlined above to give Brooklyn the "thank you" we've been planning all year-our five year anniversary finale show. With all our planned special guests and unannounced surprises, it was sure to be a day no one would soon forget.

We want to take this time to thank everyone for their continued support, for believing in who we are and what we did with this series. To the many brands who believed in us and made this series possible, we thank you. To the many artists who took slashed fees, and rejected other larger summer offers to play for free for your fans at Pool Parties, we thank you. To the agents who allowed the bands to do this because it made audiences happy, we thank you. To every photographer who took amazing photos at our series over the years, or every press outlet that covered the shows, often for every week every summer, we thank you. Lastly, for every audience member who has ever attended and enjoyed Pool Parties over the last five years, to those who raised a glass and danced and laughed with us, we thank you and will be forever grateful.

We'd be happy to hear your thoughts. If you are inclined, please send to info@jellynyc.com