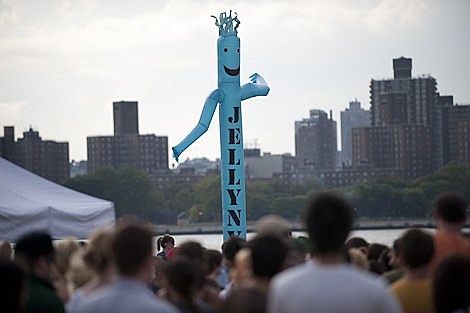 I don't know what Veoba is either. The press release explains it though...

For the past 4 years, JELLY has hosted over 200,000 people for what has become one of the most groundbreaking FREE concert series in New York. Summer Sundays in Brooklyn have become synonymous with The Pool Parties and in the series' 5th Anniversary year, Pool Parties promises not to disappoint.

This year, The Pool Parties are again on the Williamsburg Waterfront for 7 dates from July 11th--August 29th. Due to scheduling conflicts, our August 1st date will be moved to a "Block Party" in and around Brooklyn Bowl making it 8 total "FREE Pool Party Sundays".

In celebrating our 5th Year Anniversary, JELLY also would like to give a big thanks to Senator Chuck Schumer and Phillip Goldfeder from the Senator's office for all of their support ensuring JELLY'S return to the Williamsburg Waterfront. JELLY owners Alexander Kane and Sarah Hooper state that, "It has been a long hard road this year to bring this series back to Williamsburg and it 100% could not have been done without Senator Schumer's efforts. "

The Pool Parties will be co-presented by VEOBA, an online resource for artists, managers, and record labels. Based in Chicago, but with global reach, VEOBA provides the music community with select services to progress and maintain their livelihood. VEOBA launched in May 2010 as a collective made up of music industry veterans, writers, managers, artists, and cartoon characters. From co-founder Jay Parkin, "More often than not, musicians rely on others to take their careers to the next level. We're here for those who care enough to do it themselves." Sharing Jelly's values of creativity and innovation, the people at VEOBA are thrilled to be involved in this summer's production. Parkin concludes, "For the independent and the like- minded, VEOBA facilitates the next step."

JELLY as well wants to give a shout out to all of their partners this summer from the new faces to old friends. Special thanks to AllSaints and Vans. As well as Amp Energy, vitaminwater®, SESAC, ZICO Pure Premium Coconut Water, ZYNC from American Express^(SM), Spin Magazine, KEXP, and Main Drag. Along with OSA sponsors: Time Out New York, Brooklyn Brewery, and Heineken.

They didn't announce who is playing the Brooklyn Bowl block party on August 1st. One complication might be that one of the bigger bands cancelled.

The only difference between the leaked lineup and the official lineup is the addition of another "SECRET SPECIAL GUEST" and the listing of some curators. You can see the full list of confirmed free shows, below...